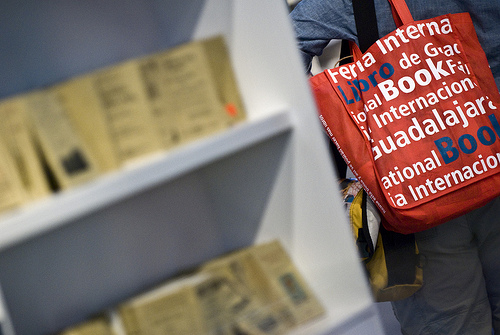 Surprisingly cold weather in Guadalajara, Mexico earlier this month marked the final major Latin-American book fair of 2011. Officially know as the Feria Internacional del Libro de Guadalajara (FIL), it was the 25th anniversary of the event, with Germany serving as this year’s guest of honor (next year it will be Chile’s turn). Official attendance surpassed 600,000 visitors, a new record.

A total of 1,935 publishing houses from 43 countries exhibited, with 774 authors participating in various round tables, debates and talks.

One highlight of this year’s FIL was a program titled 25 Best Kept Secrets of Latin America — a new website featuring some of the most interesting and vibrant new writers from the region. The hope is that putting them in the spotlight will bring interest from publishers in North America and elsewhere who might be interested in translating them. The first 25 authors picked for the program hailed from a wide variety of countries, including Colombia, Ecuador, Argentina, Costa Rica, Chile, El Salvador, Nicaragua, Venezuela, Mexico, Guatemala, Peru, Honduras, Bolivia, Uruguay and Panama. The site offers author biographies and features excerpts of their work.

This year the true star of FIL was the Romanian-born German Nobel Prize winner Herta Müller, who appeared along with Mario Vargas Llosa, for a public interview and several events (El País has posted a 22-minute video of the interview.) The self-professed “shy” author proved wonderfully open and accessible to the the press and participants of the Fair.

In his official summary, Raúl Padilla López, the president of the International Book Fair in Guadalajara (FIL) said, “The fair has become an important venue for the discovery of new talent.” He also stressed that year after year FIL has become a more international event, a tendency he hoped to foster in the future.

Contrary to what might be expected, Padilla Lopez stressed that the world economic crisis did not affect the organization of the event. On the contrary, there was an increase in sponsors in comparison to last year and that sales of the participating publishing houses surpassed $25 million.

The German ambassador Edmund Duckwitz stated that he was very pleased with his country’s participation in the event: “It was an honor to be a part of this 25th edition of FIL. All of our expectations were met. We are satisfied, as well, that language barriers were surpassed proving that for culture there are no borders.”

BONUS: Babelia, the cultural magazine of El Pais, has an excellent video archive from this year’s FIL.