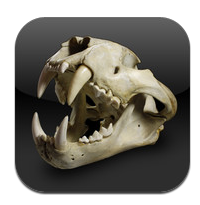 When I was last visiting my brother, I noticed a little table in the corner of my nephew’s bedroom. On it were a few bones of varying sizes and one small skull (likely a squirrel). These were treasures he found on hikes and camping trips over the last few months. Like many kids, he is fascinated with animals and their stages of life. Have I got something to show him…

On December 11th, Touch Press, whom we’ve previously profiled, published Skulls, their newest book app that goes inside the office of Alan Dudley and features beautiful 360-degree high-resolution rotations of over 300 animal skulls photographed by Nick Mann. The story behind this extensive collection, the zoology and significance of skulls in various cultures around the world was written by Simon Winchester, bestselling author of Krakatoa and The Professor and the Madman.

Winchester and Max Whitby are longtime friends and when Whitby started Touch Press, they sought out a project to work on together. “I was a geologist before I turned to writing; and topics like fossils, evolution and taxonomy had all intrigued me. So when this idea presented itself, it seemed (though perhaps not quite the metaphor I should use for a Skulls app) a no-brainer,” said Winchester.

Having written several books for a more traditional print audience, writing this app opened up some new arenas for Winchester. “I decided that for this audience — whom I took to be generally very intelligent and technically aware — I would write without compromise, and then hope and expect to be understood. The beauty of app creation — or at least, when working with people at Touch Press — is that the imagery and technological sorcery make the understanding of even the most arcane topics much more likely. Lovely images, clever technology and serious writing make, in my view anyway, for a heady mix.”

Bringing to life Dudley’s office with a 360-degree view of his skull collection, seeing the animals and reptiles both alive and as just skulls, seeing images from around the world of how skulls figure into the culture make this a very unique educational tool. Winchester telling Dudley’s story of how he became fascinated with skulls and how his collection has developed, which has had some legal bumps along the way, makes it interesting for even non-phrenologists.

When asked what part of his research he found most interesting, Winchester said, “I was captivated by the Mexican attitude to death — and skulls, of course; and I loved having the anamorphosis, in Holbein’s famous picture, so cleverly explained to me. Only this kind of new technology could possibly reveal the hidden mysteries of that picture, and it is accomplished here quite brilliantly.”

As writers debate the pluses and minuses of digital publishing, Winchester has plowed ahead. His advice to writers wary of the digital transition, “Fear not! This kind of device suggests only more and more avenues that will be opening up for the likes of us to tell our stories and explain our ideas. Book stores may be nervous, but I also suspect that they, and those who supply ever-lovelier books-as-works-of-art for them to sell, will eventually adapt, and survive. Retail Darwinism will triumph.”

In looking at publishing in general, “Within my skull, a small voice is reassuring me that all will be fine for writers and editors and publishers: the ancient human inclination to tell and talk and say what has been seen and heard isn’t going to vanish away: quite the reverse: this is a revolution, true, just as in Gutenberg’s day, but it is one from which the storyteller and the troubadour can only profit, and the audiences too.”