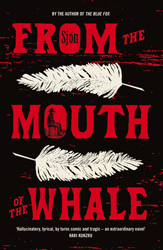 (Read our profile with Sjón from this year’s Frankfurt Book Fair, “On Myths and Crackpot Theories.”)

Icelandic author Sjón’s latest novel, From the Mouth of the Whale (translated by Victoria Cribb), follows the life of Jónas Pálmason, an Icelandic man sentenced to live out his life on a bleak and uninhabited island after being convicted of practicing the arts of sorcery and necromancy. The novel, which is set in the years 1635-1639 when Jónas is in his mid-sixties, is Jónas’s poetic and surreal stream of consciousness touching on the major events of his life, including laying to rest a troublesome ghost who haunts a remote village and meeting and falling in love with his wife.

Aside from a brief trip to Copenhagen to plead his case, the whole of Jónas’s story is confined to his island. After years of solitude, Jónas’s identity has merged with that of his desolate surroundings: “I am the brother of all that divides, all that curls, all that intertwines, all that waves…after the day’s rain showers the web of the world becomes visible…the moment night falls, the beads of moisture glitter on its silver strings…nature is whole in its harmony.”

Jónas’s weighty and formal voice makes his story feel almost Biblical, calling to mind the universal conflict between innovation and repression. And, like that of many visionaries throughout history, Jónas’s tale is filled with loathsome villains “who every day outlive their victims, sprawling in their high seats and thrones, gorging themselves on meat, dripping with grease, from the livestock that grew fat on the green grass in meadows tended with diligence by innocent, God-fearing souls; congratulating themselves on having stripped this man of his livelihood and that woman of her breadwinner.” Victoria Cribb is to be commended for capturing Sjón’s unique voice in her English translation, a difficult task to be sure.

While this is undeniably a fictional account of a man living during the 17th century, it shares few characteristics with those novels described as historical fiction. This is not a realistic rendering of a specific historical time and place so much as it is an exploration into the ravaged mind of a persecuted man. Reading From the Mouth of the Whale is like studying one of those gruesome Goya paintings of the interior of an early 19th-century madhouse: a fascinating, if unsettling, experience.

From the Mouth of the Whale is published in English by Telegram Books.