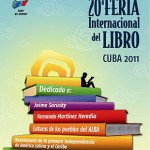 The following is a report on the year in Iberoamerican book fairs written from the perspective of a member of the Seminar on the Acquisition of Latin American Library Materials (SALAM). The 2011 book fair cycle for Iberoamerica probably started with Havana, whose book festival celebrated its 20th anniversary in February and is often attended by SALALM librarians and book dealers. This year Teresa Chapa (North Carolina) and Eudora Loh (UCLA) were present and went to a satellite book fair in Matanzas, where they also visited Editorial Vigía (home to those colorfully unique hand-made books). Given the commercial restrictions imposed by the United States on Cuba, Cuban research materials have an unusual trajectory of more than 8,000 miles (Havana-Montevideo) before reaching our bibliographic shores. Mexico City’s Feria del Libro de Minería already in its 32nd year is organized by UNAM and takes place usually in late Winter at the historic Palace of Mines, much smaller than Guadalajara’s FIL (and less focused on “profesionales del libro”). SALALM vendors attend regularly and report that many regional publishers have opted for Minería due to Guadalajara’s high priced exhibit space.

April brings International Day of the Book and Buenos Aires has traditionally scheduled its annual book festival to coincide with this date and can claim one of the oldest (37 years), and largest book events in the Spanish-speaking world reaching more than one million visitors. This year the city was also named “capital mundial del libro” by UNESCO and Nobel laureate Vargas Llosa was a keynote speaker, sparking a polemic, even before the fair opened its doors.

Ten SALALM dealers and librarians were present, witnessing a constant mention of e-books. It seemed like a continuation of similar discussions from LIBER-Barcelona 2010 six months earlier when the Ministry of Culture’s representative mentioned “contenidos digitales” and “libros electrónicos” several times at the opening ceremony. This year Buenos Aires was no exception and a one day seminar on e-books was held at the Fair during the professional days. My presentation ended just on time for the 50 attendees and I rushed to hear Argentina’s Telefonica launching of its e-book service. In May, several SALALMistas arrived in Bogota to participate in the city’s 24th annual book fair. The year before a visionary from MIT had scared participants at the Primer Encuentro del Libro Digital when he predicted the end of “libros de papel” in just a few years. This time a series of presentations included strategies for publishers to market digital content. David Block (Texas) documented some of the collective activities from our group and the Fair’s own blog provided a more detailed account of events. For the Caribbean, Santo Domingo’s outdoor book festival is always a lively event. As in previous years, SALALM vendor Libros de Barlovento was present and Darlene Hull noted that “there were more booths offering religious publications than in the past. We even found some Christian hip-hop and Rap,” not surprising since the Vatican was the “país invitado.”

By Summer’s end, it was Madrid’s turn to host LIBER 2011 and ten eager SALAMistas landed in the Spanish capital for LIBER’s 19th anniversary. Even before the first “profesionales del libro” stepped into the IFEMA exhibit halls, several SALALM members were already busy sharing professional experiences to a packed audience of more than 150 Spanish librarians.

In between meetings with publishers and cultural outings, our group also visited the Arrebato, Sins Entido, and Tres rosas amarillas bookshops in the mythical Barrio de Malasaña, at times feeling that Almodovar or any of his La Movida characters of the 1980s had just left or was about to arrive.

This year LIBER included a digital corner that showcased all sorts of e-book initiatives, with a ubiquitous Javier Celaya as its most enthusiastic supporter. Former SALALM vendor Maria Jose Acuña provided a summary of this “novedad“. Back in the Southern hemisphere Santiago celebrated its 31st annual book fair with barely enough time for many of Chile’s publishers to unpack from LIBER and Frankfort . For the first time digital projects/companies like Dimacofi, and ebookspatagonia were showcased at the main entrance of the exhibit hall held at the former train station Mapocho, now a cultural venue.

On the day I arrived Amazon’s representative for Latin America presented a videoconference and encouraged publishers to enter the digital arena, reminding them all that Amazon would arrive in Latin America soon and will most likely revolutionize the book industry, as it had already done in Spain only a month earlier. A few doors away a two day e-book seminar sponsored by CERLAC was also being held. “If you don’t do it, some else will do it” noted the main speaker to the mostly 40 something audience during the morning session I attended. It seems everyone wants to enter this yet uncharted market with concerns that a Napster-like entity will cause irrevocable damage to book publishing as it did to the music industry. The year ended with Guadalajara’s FIL “echando la casa por la ventana” as it celebrated 25 years in what has become the most important book festival in the Spanish speaking world. Germany was the featured country this year and Chile will be the “país invitado” for 2012.

It has not gone unnoticed that no Central American country has been given that honor and I could not help but wonder if that was one of the reasons why this year’s international pavilion had a special stand showcasing publications from throughout the region. This, in addition to the “cámaras del libro” and other vendors from some Central American countries, which had separate stands.

FIL closed on Sunday (December 4th) with a record of more than 658,000 attendees. Probably the event that will be remembered most was the presentation the night before by the telegenic presidential candidate Enrique Peña Nieto who could not name books that influenced him most that was followed by series of jokes through the social networks.

SALALM members were active not only as book buyers but also sharing professional experiences with Mexican colleagues.

Adan Griego is the curator of Iberoamerican & Mexican American Collections at Stanford University.

Reprinted with permission from Salam.org