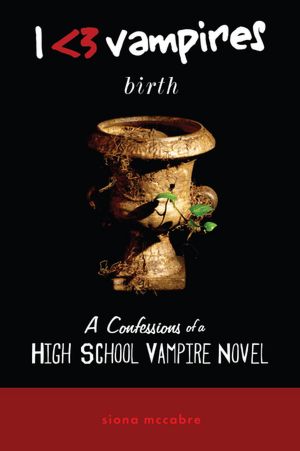 November 18th saw the release of Disney-Hyperion’s debut e-book original novel, Confession of a High School Vampire: Birth by the pseudonymous Siona McCabre. Aimed at young adults, the eBook is based on the I <3 Vampires (I Heart Vampires for those who don’t speak emoticon), a Web series found on Disney’s Take 180 website. “Given the digital format of the original series,” said Suzanne Murphy, VP and publisher of Disney Publishing Worldwide, “What better way to bring the book to fans than an e-book? We are very excited about this book and feel it will be very successful. It has adventure, romance, and a bit of tongue-in-cheek humor, and will appeal to the vampire fan reading crowd as well as fans of the Webisodes.”

Murphy added that publishing as an e-book allowed Disney to get the product out on the market quickly. “We were able to turn this around much faster than we would a print book, even though the e-book requires the same editorial care, cover design, and all those things required for any good book.”

Disney-Hyperion’s second original e-book, Daniel Waters’ Generation Dead: Stitches: Stories of the Undead, a collection of short stories based on the book series starring zombie teens, is due December 20th.

Random House Children’s book has signed a license with Zinkia Entertainment giving it the rights to publish children’s formats tied to the preschool 3D-animated television Pocoyo. The first books will be released in August 2012.

The series, which premiered in Zinkia’s home country of Spain in 2002 and has a tagline of “Learn Through Laughter,” airs in the U.S. on Nick Jr., Univision, Discovery Familia, and some public-television stations. It launched on Nick Jr. in 2010 as interstitals (short clips between shows), then expanded to half hours on weekend mornings before launching in November as a daily half-hour series.

More than 150 licensees worldwide market 2,000 products tied to Pocoyo, which is on the air in 150 countries. Publishers include Grupo Planeta in Spain, Portugal, and South America, HEP in China, and De Agostini in Italy. Random House is in talks with Zinkia about what publishing assets are available, and may adapt some international titles for the U.S. market as well as creating its own.

“Our licensing portfolio is overflowing with wonderful preschool properties,” said Chris Angelilli, VP and editor-in-chief of Golden Books. “But Pocoyo fills a need for us, which is something for the very young. We’ve had our eye on Pocoyo for some time now.”

Priddy Books, a UK-headquartered division of Macmillan, announced it will publish a range of preschool books worldwide tied to the new Schoolies brand. Created by artist Ellen Crimi-Trent, it will bring Spencer the Owl and his friends, characters initially launched through a successful mobile app last year, to life with a broad range of books including activity books, 8×8 readers, Let’s Go learning books, flash cards, e-books and more.

“When we first saw Schoolies, we immediately were drawn to the bright, beautiful, yet simplistic graphics, and of course the natural educational elements of the brand,” said Robert Priddy, Publisher of Priddy Books about his company’s rarely made licensing agreement. “Schoolies is the ideal addition to our very successful Priddy Book imprint and we are looking forward to working with Ellen and building upon the success of this line for years to come.”

“From the start, I always envisioned Schoolies as a book line, and Priddy is the perfect publisher. They have incredibly high standards of creativity and production, and I am thrilled to be launching Schoolies at Priddy,” said Schoolies creator, Ellen Crimi-Trent.

The initial line is planned to include four Schoolies book titles plus flash cards, and is set to launch July 2013 in time for back-to-school in the U.S. and other English-language markets, followed by co-editions in other territories six to 12 months later.

Crayola has entered into a partnership with Ruckus Media Group, the digital media company, giving Ruckus worldwide rights to develop interactive Crayola e-books and storybook apps. The e-books and apps will be available on all major digital platforms, including iPhone, iTouch, iPad, and Android-enabled devices.

The first three titles in the Crayola series, Color-Me Early Concepts: Caterpillar’s Colors, Color-Me Adventures: Find That Dragon, and Color-Me Stories: Picture Day, are scheduled for worldwide release in January 2012 in the iTunes App Store, with an Android release later in the year.

These next generation digital storybooks are designed to spark children’s creative thinking and problem-solving by allowing the child to become the storyteller. Each digital book features various opportunities throughout for kids to choose colors and objects that subsequently shape the story with the child’s personal stamp.

“What’s intriguing about this partnership is the strength of the brands and our ability to work with children’s authors and illustrators in partnership with Crayola to inspire children’s creativity,” said Rick Richter, Ruckus Media Group’s president and CEO. “Parents and children expect the highest level of quality in everything Crayola does — our intent is to delight and inspired kids in new and innovative ways.”

Warren Schoor, Crayola Director, Licensing, added, “We see digital devices as another canvas for kids to share their originality and creative idea. Everything about our e-books and story apps actively engages children in reading and creating as they interact with the stories. Ruckus Media Group has helped us bring our e-book vision to life in a way that parents would expect from the Crayola brand.”