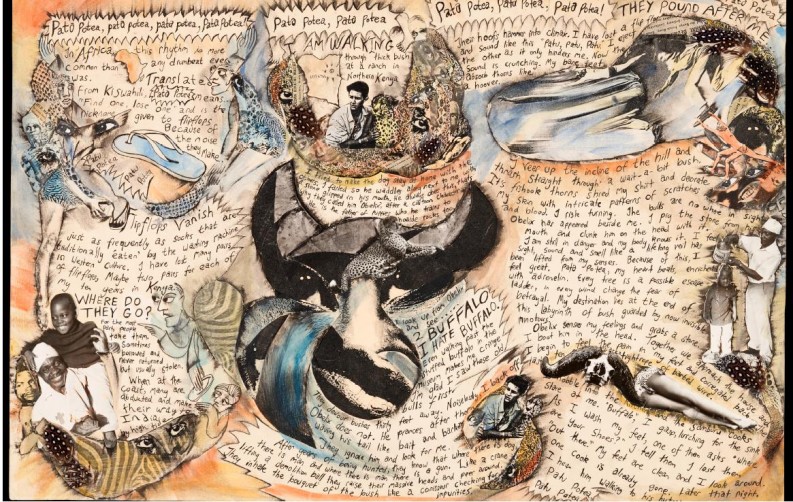 Dan Eldon was an artist, photographer and humanitarian activist. In 1993, while covering the civil war and famine in Somalia as a photojournalist, he was brutally murdered by a mob of protestors at the age of just 22. Four years later, Chronicle published The Journey is the Destination: The Journals of Dan Eldon, which told the story of his brief life through his heavily illustrated journals. That book struck a chord with Jennifer New, who while working as an educational curriculum developer, came across it one day while browsing in a bookstore. It was a life-changing experience. Jennifer New, inspired by the life of the late Dan Eldon

Inspired by the story, Jennifer contacted Eldon’s mother, which led to her writing an authorized biography of Eldon for adult readers: Dan Eldon: The Art of Life, as well as her most recent book, Dan Eldon: Safari as a Way of Life, written for a YA audience, and published by Chronicle in October. The YA title is a work of art in itself: illustrating and illuminating Eldon’s story with his photos, paintings and collages, along with numerous interactive elements.

I recently had the opportunity to interview New about her involvement with the Eldon family, the challenge of transforming a biography aimed at adults to one aimed at young adults, and the message that she hopes that young readers can find in Dan’s life:

Publishing Perspectives: What went into the decision to take the adult book Dan Eldon: The Art of Life and rework it for the YA audience?  What was the process like? How did that come about?

Jennifer New: Well, Chronicle has always excelled with fun bells and whistles in their books. The other two Dan books had some pull-outs and such. Julie and I spent a lot of time on a particular trip to NYC together and then on our own looking at books that had interactive features. We pressed the Chronicle design team to think about all the options available to us. I think the biggest inspiration for me was a biography of Kurt Cobain, Cobain Unseen by Charles Cross, that had pieces of what appeared to be notebook paper and the front covers of old cassette tapes. It really gave me a different and more vivid sense of Cobain than other books, and I wanted some of this on the Dan book. When I was a little kid, reading Louise Fitzhugh’s Harriet the Spy led me to spend at least a week walking around and keeping notes on all my friends. I can see the potential inspiration for this book and Dan’s life going in many directions: art, activism. What do you want your readers to take away from the book and from Dan’s life?

What I always hope people will take away from Dan is an inspiration to live a first-hand life — not to live through computers and television — but to be out experiencing people and places firsthand.  He was so curious and so open to everyone. His friends in school included the most popular to the most seemingly awkward or invisible. We all have it in us to be that open to life and other people, but we forget — we get tired, we get lazy, we take the easy route.

And finally, you’ve been involved with Dan, his life and his family for more than a decade now — what’s next?

I did a book that came out in 2005 that was very much inspired by Dan — Drawing From Life: The Journal as Art was a compilation of 30 contemporary people who keep journals that are largely visual in nature. I’m now on a very different path interviewing people about divorce and intertwining those interviews with my own memoir of my own divorce.

Not a kid’s book — though my daughter, who is ten, says she should write the kid’s version.