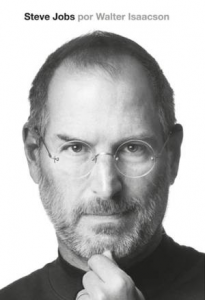 Want more news from Brazil? Subscribe for free to the weekly newsletter from PublishNews Brazil

Steve Jobs is not among us anymore, but is still a phenomena. The electronic version of his biography written by Walter Isaacson is breaking sales records in Brazil and has already become the top-selling e-book ever in the country just two weeks after its release.

“It’s the bestselling e-book in our history,” says Marcílio D’Amico Pousada, the CEO of Saraiva, the largest book retailer in Brazil. Not only it is selling well, but also the format is selling more than usual. The e-book sales correspond to 22% of all print copies sold, according to Pousada, which is well above average in the Brazilian digital book market.

At Livraria Cultura, the second largest bookseller, digital sales of Steve Jobs correspond to 10% of physical sales. Mauro Widman, the company’s digital books coordinator, says average percentage is less than 5% for other e-book titles. “It will soon become our bestselling e-book ever.”

To Carlos Eduardo Ernanny, owner of Gato Sabido, an independent online book retailer, the digital version of Steve Jobs is the “first e-book phenomenon in Brazil.”

Companhia das Letras, the publishing house which published the book in Brazil said it had sold 3,000 digital editions of the book in the first week after its official release on 24th October.

The success is explained, according to the book retailers, by several things: the simultaneous launch of both the physical and digital versions; the lower price (the e-book price is R$32.50 vs. R$49.90 for the print copy); the fact that it can be more comfortable to read the 624-page Brazilian edition electronically, and the media frenzy following Steve Jobs’ death on October 5, which made timing for the book more especially apt.