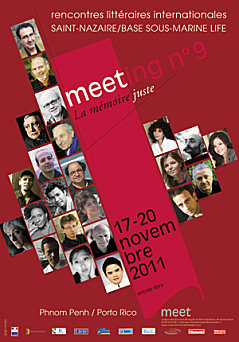 An annual three-day public literary event is about to kick off in Brittany at the Maison des Ecrivains Etrangers et Traducteurs, (MEET) which roughly translates into “Foreign authors and translators’ house.”

Each year MEET invites writers from around the globe to discuss a theme. This year’s topic is on memory and truth, and the guests of honor are writers from Cambodia and Puerto Rico.

Patrick Deville, MEET’s literary director, whose novel Kampuchéa was published by Seuil last year, recently spoke to the French magazine Telerama about a Cambodian literature that is slowly rising from the ashes after being very nearly wiped out during the Khmer Rouge regime. While he was doing research for his novel in Cambodia, Deville met Phoeung Kompheak, a young author who publishes in Khmer and French under the pen name Nantarayao Samputho and together they chose two other writers, Neng Kanitha, Kao Seiha, who will be present this weekend in Brittany.

Although Cambodia had a rich literary history, young writers today, said Deville, have to start from scratch, in a country with a book industry that is in its infancy.

MEET just published a bilingual anthology of texts on memory and truth by writers from a variety of countries including Cambodia and Puerto Rico.