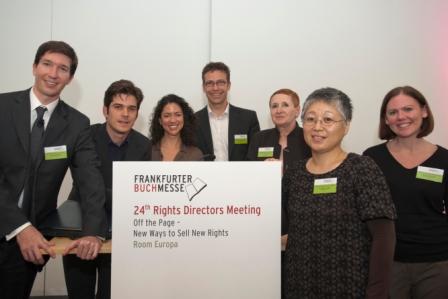 By Edward Nawotka and Roger Tagholm

The field of rights management is experiencing seismic changes. Today is typically the day when agents gather in at the lush Frankfurt hotels to wheel and deal prior to the opening of the Frankfurt Book Fair. With the Fair’s official opening tomorrow, we asked agents what’s foremost on their minds. The growth markets in 2011 include Russia — which, according to one agent, is “perking up” — as well as Eastern Europe, Spain and Latin America, especially Brazil. “Brazil is one of the most dynamic markets right now,” says literary agent Jenny Meyer, who represents foreign rights for a variety of US agents, and who this year will be attending her 12th Frankfurt Book Fair. “There is still a great deal of competition among publishers for books -– and they are buying.” Farley Chase of the Waxman Agency in New York, agrees, noting that the Brazilians have been snapping up non-fiction (a category that has been a tough sell elsewhere in recent years) and young adult books. “Our YA titles are some of the most valuable stuff on our list,” says Chase. “A lot of international publishers have gotten into YA in recent years and been very successful with it. There’s still a wave of interest in acquiring it.” Brazil is one of the main focuses of the 2011 International Rights Directors Meeting, taking place tomorrow.

The other top issue for the rights trade remains the impact of digital publishing and the corresponding expansion of rights and licenses. This will form the second focus of discussion at the International Rights Directors Meeting, with the main emphasis on negotiating and selling for mobile applications. While 25% of net receipts is the agreed de-facto standard for e-book royalties, the rates for licensing for other media, such as apps and transmedia projects, have yet to become established. One solution has been to offer blanket contracts with certain stipulations attached, such as the guaranteed use of DRM, and pricing that doesn’t drop below a certain level (for instance 50% of the print edition).

Agencies are starting to think more and more about backlist titles. As Derek Johns of UK agency AP Watt explains, “On e-book royalties, there’s some movement up to 40% on backlist, which was the figure established by Random House US. That’s for uncontested backlist, where the contracts were drawn up in the early 90s or earlier, with no reference to e-books.”

“What we want to do is look at digital as a wonderful opportunity to increase the reach and revenue for writers,” says Caroline Dawnay of United Agents. And Ed Victor of the Ed Victor Agency believes there is general consensus, whether talking about e-books, apps or other types of media, that “if you have rights, then you need to do something; you need to exploit them.”

Agents and their new self-image

If the publishers won’t act, it’s increasingly likely that agents will do. Last year, Andrew Wiley famously issued several digital editions of books by his client authors. This year in the United States, the Waxman Agency launched it’s own e-book imprint called Diversion Books, while in the UK, Ed Victor has started a new e-book and print-on-demand venture, Bedford Square Books. Starting this autumn, this will offer reissues as well as original titles.

Concerns have been raised about potential conflicts of interest. “But is it a conflict of interest?” asks Victor. “I don’t think so. I think anything agents can do to extend their services and support their authors is valid,” he said.

Among the ways in which agents are helping their clients is the more aggressive pursuit of lucrative film licensing deals. Many agents enlist the services of specialized film agents to handle these deals.

Anna Soler-Pont, Director of Pontas Literary & Film Agency in Barcelona says: “More than a quarter of all the films produced in the world come from books. Just think about the success of Harry Potter, Bridget Jones, Brokeback Mountain — all these films come from books. The publishing industry is getting closer and closer to the film industry, both of them start to work like a team. The cooperation between publishing, film and games is an even newer development, and it will be the next big thing in the course of the next two to five years. All agents who handle audiovisual rights deal with the games industry, but there is not yet an agency with a strict specialization in games. This is the thing to come.”

When all is said and done, the core job of rights professionals still remains the same. “We’re looking for the best opportunities for our authors, and want to protect their interests in the long term,” says Stephanie Thwaites of Curtis Brown. “Ultimately we’re still focused in the same way, even if the conversations are slightly different.”

Stefan Lübbe, of publishers Bastei Lübbe in Cologne, adds: “For the future, we set great store by the philosophy ‘digital first.’ We’ve created an internal department for this very purpose, which is developing some completely new formats. Of course, these will inevitably include film material and interactive features, as well as online games. That’s why we’re specifically looking for business partners in the film and games industries, and also from multimedia agencies. As book publishers, this means we’ll have to think and work in different ways from what we’re used to.”

With its StoryDrive Business Center, the Frankfurt Book Fair has set up a market place specialized in a crosscutting rights trade for all the industries. Such a platform promises great value addition for any publishers who are thinking seriously about new multimedia formats, because for the first time it brings together representatives of all the creative industries in one place. We’re going to use this cross-medial rights platform to make new contacts in the film and games industries.”

To help agents and rights managers market their content as effectively as possible, all registered participants in the International Rights Directors Meeting and in the LitAg 2011 will have free access to the StoryDrive Business Center. The StoryDrive Business Centeris the first organized platform for the cross-media rights and cooperation business. In conjunction with the two-day Frankfurt StoryDrive Conference, the Business Center provides media and entertainment professionals an opportunity to present projects and negotiate financing, rights or merchandising deals with potential partners from the publishing, film and games industries.