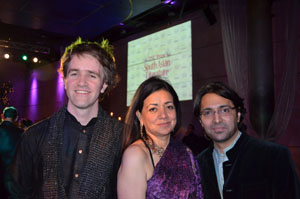 A literary prize for fiction with South Asian themes or characters is worth $50,000 and has earned support and recognition from international publishers and agents. The DSC Prize for South Asian Literature continues to grow in stature. The original idea to establish and fund a major prize came from DSC owners Manhad and Surian Narula. Two of the prize’s organizers, Jon Slack and Bhavit Mehta, are to be congratulated for adding the DSC South Asian Literary Festival — an 18-day celebration involving 80 authors, 17 venues and 54 events that makes sorting out the traffic on Delhi’s fabulously busy Chandni Chowk seem easy.

With continuing high-level funding from DSC, an Indian infrastructure and construction company, the prize’s rise up the literary calendar is easy to see. This was was evidenced this week by the high-profile turn-out for Monday night’s announcement of the shortlist at London’s Globe Theatre, which saw many leading agents and publishers in attendance. Yes, there were quibbles about the length of the event, and proceedings were hampered by one or two technical hiccups, but this is only the prize’s second year and the overriding sense is of a prize moving in the right direction, buoyed up by authors, publishers and agents who want to see it succeed.

The DSC prize is unusual in that the ethnicity of the authors does not matter. In a rather moving address, Surina Narula, whose husband owns DSC, remarked on the number of countries in which she has lived and noted: “In my experience, people are the same underneath.”

“You don’t have this kind of prize in Asia,” said Kishwar Desai, who was there with her husband, the economist Lord Desai. She is the author of Witness the Night, one of the long-listed titles and the winner of the Costa First Novel Award earlier this year. “Publishers from all over the world are eligible for this, so you have a much bigger pool of books,” she said. “It’s encouraging people to write about Asia.”

Among industry figures lending their support were Pete Ayrton of Serpent’s Tail, “because of my interest in world literature”, as well as Carole Welch of Sceptre, Patrick Janson-Smith of HarperCollins’ Blue Door imprint, Geraldine D’Amico, Director of Jewish Book Week, and agents Gill Coleridge and Margaret Halton of RCW, and David Godwin, who sits on the organizing committee. Welch said: “It’s great to have an award on this theme,” and Coleridge commented: “Some of the most interesting writing is coming out of India and there’s no doubt that Indian publishing is a booming market.”

The ethnicity of authors does not matter for the DSC Prize, but the novels have to have a South Asian theme or characters. Meru Gokhale, who runs Random House India, said: “It’s marvelous that someone is giving so much money to authors, and I think it’s good that it’s open to anyone. It isn’t parochial at all. I just wish they’d start a category for non-fiction.”

Slack, 29, established the festival and the prize, with his business partner Bhavit Mehta, whom he met at the UK’s Society of Young Publishers (SYP). Mehta was a disillusioned scientist at University College in London who wanted a career change and set up the children’s publisher, Saadhak Books.

Originally from Adelaide, where he worked at Borders, Slack came to the UK in 2003 and did his spell of “bar work and call centers”, as he puts it, before taking a work experience position in Penguin publicity in 2005. He chaired the SYP in 2008 and is now Development Manager of the Book Marketing Society, in addition to freelance work organizing various conferences.

The shortlist for the 2012 DSC Prize for South Asian Literature, which comes with a $50,000 award, is as follows:

Chairperson of the jury, Ira Pande said: “This is just the second year since this prize was instituted, and I am sure that in the coming years it will bring forward a world whose time to take center stage has arrived.”

The winner will be announced at the DSC Jaipur Literature Festival on January 21, 2012.