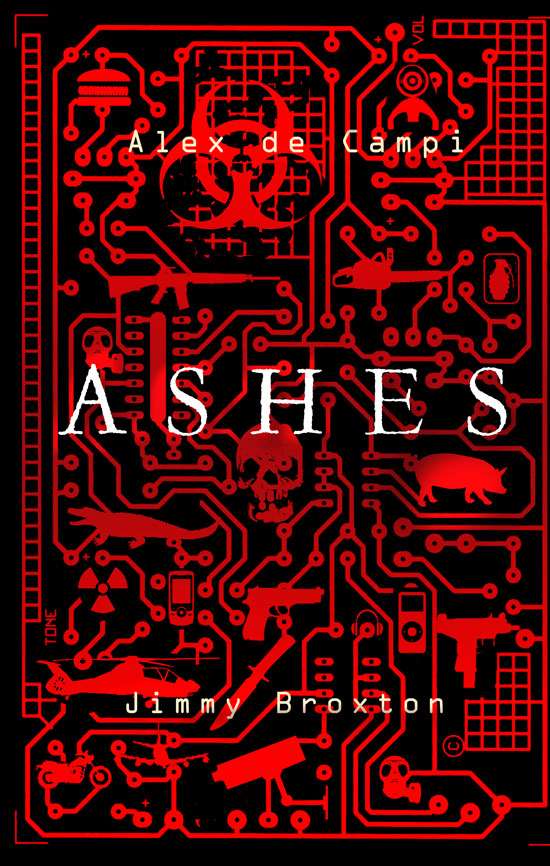 After wading through existing rights sales channels, de Campi came up with her own model for funding her work and selling the rights Crowdsourcing the funding to self-publish books isn’t a new idea. Kickstarter got the trend going more than a year ago, Unbound took it a step further (just to name two examples). But how about using a service like Kickstarter to sell print, translation and film rights — as well as to secure bricks-and-mortar retail distribution? Author Alex de Campi and illustrator Jimmy Broxton are doing just that. Using Kickstarter as a platform, the duo seeks to raise $27,000 over the next two months to fund production of their latest project, a futuristic dystopian graphic novel called Ashes.

In addition, $105 will get you five copies of the books, as well as the “bundled” digital download, for you to resell, provided you’re a comics book retailer or independent bookstore.

“These retailer bundles came about by retailers contacting us, and saying, “we want to be involved,” says de Campi. “There is a lot of weird about how comics are distributed — the dichotomy of (sale and nonreturnable) comic shops and (sale & return) bookstores, and online . . . comic shops are a very strong voice for a book and it’s a bad idea to marginalize them. Unfortunately, the way digital is happening is marginalizing them. It doesn’t have to, as we demonstrate.” A panel from the interior of Ashes, click to enlarge

The idea behind the project was to make the book deal transparent. “It’s usually covered in layers of secret-squirrel legacy bullsh*t and it doesn’t need to be that way anymore. I have a property! It would make a great smart action film! It also would sell well in a cheap trade edition! This seems like the best way to advertise that,” says de Campi, who has published numerous graphic novels and books, including 2005‘s Smoke, a prequel to Ashes which garnered an Eisner award nomination for Best Limited Series.

No stranger to novel experimentation, de Campi published her 2010 graphic novel Valentine serially online in 14 languages simultaneously. That said, she admits that some of the inspiration for using Kickstarter to sell rights came from Dan Kieran at UK upstart Unbound, which itself offers employs a crowdsourced publishing model. She was also assisted by her prose agent, Ethan Ellenberg, who offered advice on pricing.

“[Ellenberg] has worked with my comics properties before,” says de Campi, “but for what I do — a classic style like V for Vendetta or Watchmen which mixes a literary component and a strong genre component — there are literally no publishers. Or at least, none that offer advances. Plenty of people will happily publish me with zero advance and for 50% of my rights. Um, pass, thanks. So Ethan has been super-supportive of me trying out alternative distribution and publishing techniques. Ethan’s a real forward thinker, and that’s why I adore him as an agent. He is one of so few . . . though he is going to kick my a** if I don’t get moving on my prose novel.” As for offering the film rights online, which may seem to be something of a stretch for a crowdsourcing project, de Campi says the need arose out of a string of disappointing experiences with previous projects:

“I have had a number of comic-to-film agents,” she says. “Every comics writer gets pounced on by would-be agents from the shady to the merely incompetent, as soon as they show up at SDCC with a book. The agents I have had have without exception been unremarkable. My WME guy got fired; my CAA guy was really junior and more interested in going to parties at Will Smith’s house than making deals . . . Tried a couple independents, no dice. The problem is, at my fairly low level, you just don’t want the film agent you’re gonna get. I’ve gotten to the point where I’m pretty well connected in Hollywood — I’m writing a comic for Gore Verbinski’s production company and have fans and friends at other production companies — and frankly the production companies interested in comics have people scanning Bleeding Cool every day looking for new properties anyway. So I know there are amazing book to film agents out there; I also know I am too small for them; so I’m doing it on my own.”

So, is Kickstarter going to deliver results? Well, less than a week of going live, Ashes has attracted more than 130 “backers,” nearly $6,000 in donations, and its first retail partner. As for rights deals, de Campi is confident they too will find a home. “We have had serious interest from two entities so far, a UK publisher and a North American one. But the Kicksterter’s only been up for like 72 hours . . . it’s super early days yet.”

DISCUSS: Should Self-publishers Handle Their Own Rights Sales?