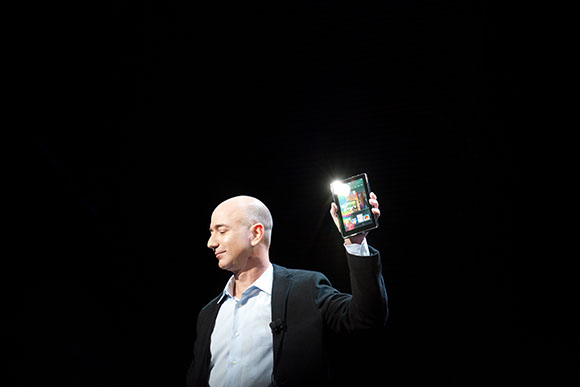 At a press event in New York on Wednesday, Amazon CEO Jeff Bezos unveiled its new Kindle tablet — the Kindle Fire– which confirmed the rumors and hype that have been building for some time. Called the Kindle Fire, the tablet device sells for mere $199 (the Apple iPad starts at $499) and ships on November 15. The Kindle Fire features a 7-inch touch screen display with 169 pixels per inch and 16 million colors. It weighs in under a pound at a mere 14.6 ounces — the Apple iPad weighs 1.33 pounds (21.3 ounces). The device also ships with Amazon Silk, a new “cloud accelerated” web browser that speeds up page loading time on mobile devices by processing the web pages in the Amazon cloud before delivering the results to the device.

Onstage at the event, Bezos called the Kindle platform an “end-to-end service” and with the “family” of devices and apps, Kindle is also an entire content “ecosystem.”

With the Kindle Fire, Amazon customers can access all of their Amazon content — books, magazines, newspapers, music, movies, television, apps and the web — on the device. Content on the Kindle Fire (and other Kindle devices and apps) is backed up in the Amazon Cloud for free.

Bezos emphasized the automatic syncing and free cloud storage for Kindle content as a solution to the “broken model” of making consumers responsible for backing up their own files. In addition, Amazon’s recently launched app store will also be available on the Kindle Fire. This extends the Kindle Fire well beyond a device for consuming content, and makes useful for email, games, utilities and more.

Also unveiled at the press event was the Kindle Touch for $99 and Kindle Touch 3G for $149. The 3G service will be free and available in 100 countries. Bezos told the audience, “we’re going to sell millions of these.” In addition, the standard Kindle with Special Offers now sells for $79.

Kindle devices also now come with a new feature called X-Ray, which analyzes and visually dissects keywords, characters and locations within a Kindle book’s pages. X-Ray allows readers to highlight words and see passages throughout the book containing that word, as well as additional information from Wikipedia and Shelfari.

Bezos said that Amazon initially “set out to improve upon the book.” With this new lineup of Kindle devices as well as Amazon’s ever-expanding library of content, the Kindle platform is shaping up to be a serious rival to the iPad.