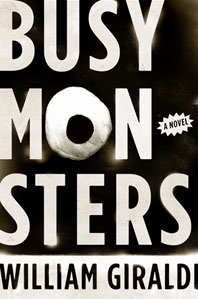 In an essay, Norman Mailer once said something to the effect that, when reading a writer’s first novel, pay close attention to the first and last lines, since they’re invariably the ones that the novelist showers the most attention upon. That being said, I defy anyone to read the first line of William Giraldi’s debut novel, Busy Monsters, and not want to continue forward:

“Stunned by love and some would say stupid from too much sex, I decided I had to drive down South to kill a man.”

I can’t and won’t share the novel’s equally extraordinary last line, because the road that Giraldi sends his hero Charles Homar along, involving a runaway finance who he adores but is obsessed with capturing a giant squid, Bigfoot, a midget Philippine expert on UFOs, and a bodybuilder and his libidinous harem, among other American eccentrics, is one well worth taking.

Giraldi’s prose and amuses dazzles throughout, as in his description of Sasquatch hunter, Romp: “Hunter. Scholar. Priest. Negro. Prophet. Man of jazz and all items sacrosanct. Shaves with obsidian. Has razzle and the necessary dazzle to mix it with. Also copulated with Florence Ballard in 1974.” The story itself, told through the weekly autobiographical essays that Homar writes for New Nation Weekly, “circulation a hearty six hundred thousand” is a picturesque, meta-fictional, self-referential delight.

With Busy Monsters, William Giraldi makes what seems to me to be a tremendous splash in the literary world, and hopefully, one that augers even better things to come. I’m going to keep things simple: Read this book.