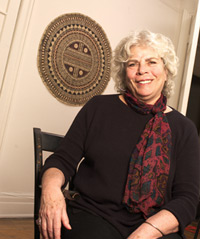 “We English-speakers are not interested in translations,” says translator Edith Grossman. “I don’t believe that this will change soon…”

(This story, translated from Spanish by Fred Kobrak, was originally published in La Nación, a daily newspaper in Buenos Aires.) As a teenager, when I started to read novels in translation, I ran so often into expressions like “fruncir el ceño,” “entrecerrar los ojos” and “encogerse de hombros” that I thought they were common usage in Spanish. Only later, when I learned that Spanish-language writers didn’t use them (or they shouldn’t), I realized that these phrases had been made up by the translators, who had agreed to translate some words the same way. Later, when my English got better, I found out that “fruncir el ceño” is to frown, “entrecerrar los ojos” is to squint and “encogerse de hombros” is to shrug. Noticing that English uses five letters where it takes Spanish twenty or twenty-five letters do to the same job, I wondered if English was a more efficient or economical language than Spanish.

“No, no. All languages are equally efficient. That is why they exist and why people use them.” The respondent, not very seduced by my reasoning, is Edith Grossman, the translator into English of Gabriel García Marquez and Mario Vargas Llosa and the latest and much-praised version of Don Quixote (2003). “What is true, though, is that English has an enormous vocabulary, four or five times bigger than Spanish, French, Italian or Portuguese,” she says, in her Manhattan apartment.

“Five times bigger?,” I ask, probably frowning. “Yes. That’s because there never was an Academy of the English Language and, for the same reason, there never was any censorship banning the import of words from other languages. English is full of words that come from Spanish, Italian, Yiddish and Native American languages. We import words from all over the world.” One of these words, not very honorable, comes from Buenos Aires, where I grew up. In English, the military government of an exotic country is known as a “junta,” just like in Spanish.

Grossman, who Harold Bloom has called “the Glenn Gould of translators,” could spend hours savoring and sifting through the minimal aspects of the art of translation. In recent years, however, she has dedicated a good chunk of her energy in a crusade to defend the literary and human value of her profession. Last year she published Why Translation Matters (Yale University Press), a polemic and manifesto where she denounces the indifference of English-speaking editors, reviewers, academics and readers when faced with novels originally published in foreign languages. In her book, Grossman mentions the well-known fact that only three percent of the books published in the United States, Great Britain and Australia are translations, while in Europe and Latin America this percentage number fluctuates between 25% and 40%. “We English-speakers are not interested in translations,” says Grossman. (An interviewer infected with translators’ jargon would have commented that Grossman said this “with a sigh”, or “shaking her head.“) “I don’t believe that this will change soon, since almost all publishers are part of large corporations and make their decisions under enormous pressure to be profitable.”

I mention then that a few small and medium US publishers have recently published translations of books by César Aria, Alejandro Zambra and Juan José Saer. “I love these publishers, and they have good people working there,” she says. “But they are too small, they have a lot of trouble getting adequate distribution and good publicity or reviews in the media.”

In spite of everything, in the English-language world new translations of classical works sometimes get the same attention given to new novels. Grossman’s Quixote was a major event in the world of letters, just like Lydia Davis’s new translation of Madame Bovary was last year. A few months ago, Julian Barnes wrote a long review of Davis’s version, comparing it with half a dozen earlier translations. In Barnes’ view, translations in the last few decades have become more accurate but also more cumbersome and less fluid. Barnes said that new translators, wanting to reflect in more detail the author’s original intention, had forgotten how to write well in their own language.

Grossman smiles a little nervously. “Barnes is a very special character,” she says in Spanish, and refuses to give an opinion, probably out of professional courtesy. But she doesn’t hide that her translation ideology has little to do with exactitude. In Why Translation Matters, she wrote that “fidelity is the noble purpose, the utopian ideal, of the literary translator, but let me repeat: faithfulness has little to do with what is called literal meaning.”

In her book, Grossman — who translated Vargas Llosa’s The Feast of the Goat and García Márquez’s Love in the Time of Cholera and started in her profession in 1973 with a short story by Macedonio Fernandez — tells a story that happened to Gregory Rabassa, another major translator from Spanish to English, which illustrates this point very well. Rabassa was being interviewed by a Colombian journalist after having translated One Hundred Years of Solitude. The reporter asked him if his Spanish was good enough to translate someone as talented as García Márquez. After a short pause, Rabassa responded: “What’s really good is my English.”

Grossman fell in love with Spanish as a teenager, thanks to a Spanish teacher “who was very good.” She read Don Quixote for for the first time in Philadelphia, where she grew up, in Samuel Putnam’s classic 1949 translation.

The half-century gap between Putnam’s version and hers can be seen from the very first sentence of the book. Putnam translates the legendary beginning of Cervantes (“En un lugar de la Mancha, de cuyo nombre no quiero acordarme”) as: “In a village of La Mancha the name of which I have no desire to recall.” It’s an accurate translation, but somewhat clumsy, and that feels a bit dated. Grossman, less forced to follow the literality of the sentence and with an ear more attuned to capture Cervantes’ intention, writes: “Somewhere in La Mancha, in a place whose name I do not care to remember”.

This “I do not care,” disdainful and conversational, reflects much better the mocking spirit of Don Quixote’s narrator, who from the first sentence introduces himself as an unreliable guy.

Is all these subtlety worthwhile? For Grossman, there is no doubt. “The importance of translation is self-evident,” she writes in her book. Maybe that’s why she feels bad about her battered professional colleagues, “poorly paid and with no job security.” She describes most of them as people “who do not look for fame or fortune but do their work out of love for literature.“

For Grossman, translation is much more than this: translation makes us better people, because it opens our minds and allows a better understanding between cultures. In a key passage of Why Translations Matters she says: “Translation expands and deepens our world, our consciousness, in countless indescribable ways.” It’s impossible to know which gesture she made when she wrote this fragment, but she probably nodded. Or, as a Spanish translator would have put it, “asintió con la cabeza.”