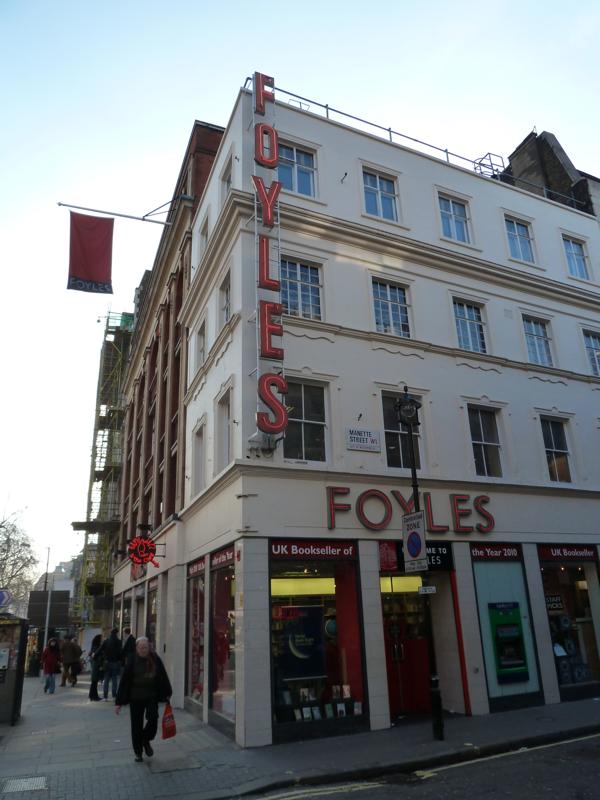 London’s venerable Foyles is profitable, opening stores across the UK and looking to expand internationally. Chief Executive Sam Husain explains what comes next for the beloved brand. LONDON: Foyles, whose 105-year-old, 40,000-square-foot bookshop on London’s Charing Cross Road is still surely the most famous bookshop in the world (New York’s Strand, San Francisco’s City Lights, Paris’ Shakespeare and Co. can fight amongst yourselves for the #2 spot), would like to expand internationally and believes franchises and partnerships are the way forward.

“Since I joined, I’ve wanted to do something with our name overseas where it is often better known than it is here,” says the company’s amiable 64-year-old Chief Executive Sam Husain. “We have a strong brand and systems that work. The problem is how to manage it with our resources, as well as issues like the supply chain and training. I believe the way to go is franchises and partnerships, and I would be interested in having conversations with serious parties who understand what we are about.”

Despite the web, the supermarkets, the parlous state of the UK economy and the numerous death notices being written for bricks and mortar, Foyles is on something of a roll. With a turnover of just under £23 million, it is on course to post a small profit for the second year running and is talking about further, albeit small, expansion in the UK. It has recently opened its first store outside London -– in Bristol -– and later this year it will open another satellite branch in Stratford, next to the site of the 2012 Olympics. “The idea with these stores is to see if they work and if they do, we’ll go further afield. I’d like to open more, but it’s important not to overstretch -– that’s a mistake that has been made elsewhere.”

He certainly feels there is a future for physical bookshops. Speaking about the Charing Cross Road store he says: “Foyles is unique. While others may retreat from flagship stores, we think they are vital. There is definitely a place for bricks and mortar. People want human contact. They want to be able to talk to knowledgeable booksellers, and they want to browse range, which you cannot do on the internet. Browsing is entertainment, and you cannot replicate that online. We can also add a little bit of theater here, with our events space and jazz in our café.”

But how will the store position itself against a revamped Waterstone’s? “I only look internally,” says Husain. “That’s where I’m focused. We’ve gone through things very carefully. We’ve rooted out waste and we’re only stocking those titles that are relevant. Our booksellers understand the business metrics and are responsible for their departments’ profit and loss. It comes back to people in the end. Our booksellers are vital –- so intelligent, so highly educated. They may not show up on your balance sheet as an asset, but undoubtedly that’s what they are. They are your biggest asset [Waterstone’s new chief, James Daunt, says the same]. Your booksellers enable you to excel at service and information. That’s why our booksellers reside on the shop floor, so there is always someone on hand to help.”

Husain is sanguine about online and digital and knows that people use the shop for research and then order from Amazon. “Of course that happens. You can’t stop it. But people like to browse and one day they’ll come back. We’re saying to publishers ‘look, we’re your showroom, support bricks and mortar, our booksellers are very well informed’. We’re having talks with publishers at the moment, not about terms as such, but about a range of issues. I’m a believer in working together, and we are undertaking more exchanges now where we swap staff with publishing houses and learn each other’s concerns.”

He sees digital as a way of creating new readers and observes: “You can’t sign an e-book, you can’t put it on a shelf and what happens why you ditch your old reader? Some will migrate on to print.” When the store moves to an even larger, adjacent site in two years’ time, he is planning a dedicated digital zone and says: “We would like to work with a company dedicated to developing the next generation of e-reader.”

Foyles occupies a special place in the UK book trade, with older members having grown up with it and more than a few having done their stint on its then, famously ramshackle sales floor. Stories about its long-time owner Christina Foyle, whose father William founded the company with his brother Gilbert in 1903, are part of book trade lore -– how, for example, if you revealed that you learnt a musical instrument at your job interview, then the position was almost certainly yours. And how you were invariably fired before six months was up, to avoid gaining any employee rights and becoming too expensive.

When she died in 1999, it was a bit like the passing of an East European dictator, albeit one crossed with Miss Marple. For so long, she had refused to modernise; now, at last, change was possible and in 2002 a multi-million refit began. Gradually, the shop was brought into line with its competitors, most notably Borders, who then had a store opposite and whose design Foyles imitated to a degree, with light wood shelving and a much more open ground-floor.

Thankfully, it remains a little eccentric, a flavor that Husain is keen to retain in the forthcoming move. It is the only bookshop in the UK -– possibly the world –- where you can buy The Grapes of Wrath, an Urdu dictionary and a stethoscope, the latter because there is a medical department in the basement that also stocks a range of surgical implements. This was always Foyles USP: that it was a series of specialist bookshops under one roof, and that remains true to this day. The pull of the mainstream is very strong, but you will still find titles in Foyles that you won’t see elsewhere.

“We sell range,” says Husain. “That’s a key part of our strategy. All our departments are bookshops in their own right. We’ve recently bought the language specialists Grant & Cutler and that department is doing very well. In a way, we’ve tried to address the issue of shops closing in Charing Cross Road. We bought the feminist shop Sliver Moon some time ago, and folded Ray’s Jazz shop into the store too.”

Husain only took the reins at Foyles in May 2007, having been brought in by Chairman Christopher Foyle, Christina’s nephew, who wanted someone from outside the business. Born and raised in Pakistan, the son of a doctor, his background lies in management positions in companies specialising in broadcast engineering and post-production, latterly with Ascent Media whose parent company, Liberty, is the new owner of Barnes & Noble.

He admits to not being a book person as such, although quickly rattles off two titles currently on his iPad (Andrew Marr’s History of Modern Britain and Romila Thapar’s History of India) and says: “I don’t try to do what our booksellers do, but I do help them develop latent skills in areas like metrics, margins, stock turn…I enjoy it here very much. I must do because I was only brought in on a six-month consultancy -– and I’m still here.”