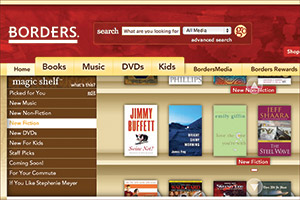 Firing its community relations coordinators, handing Amazon its web site, “category management”…Why 2001 was the beginning of the end for the bookseller.

As we all know by now, Borders bookstores are now being liquidated. Hundreds of stores are closing and 10,000 people are losing their jobs. Publishers are going to suffer as the people responsible for selling to the bookstores also lose their jobs and hundreds of thousands of unwanted books come flooding back into their warehouses as returns. Authors are going to find their announced first printing — and subsequent royalties — shrink as their publishers print fewer books based on lowered sales expectations.

While the disappearance of Borders might possibly be seen as a referendum on the long-term viability of bookstores and their ability to compete against digitization and e-books, it should be remembered that the basis for Borders’ demise was laid a decade ago, way back in 2001. At the time, the company had more than 2,000 stores in the United States (360 of them superstores), 50 overseas, and earned more than $3 billion in annual revenue. But a series of unfortunate decisions and one tragedy permanently undermined the company’s position in the marketplace.

The first was in January that year when Greg Josefowicz, the former president of Jewel-Ocso, a division of the grocery store and pharmacy chain Albertson’s, added the title of Chairman of Borders Group to his list of titles, which had already included president and CEO and of the company.

Can you treat books like orange juice and shampoo? Josefowicz seemed to think so and soon implemented the controversial strategy of “category management,” a program that limited the number of titles that would be on sale in a particular genre, say cookbooks or biographies. It wasn’t as draconian as pay-to-stay “slotting” — the norm in the grocery business — but was nevertheless widely criticized as favoring large publishers over small presses and for catering exclusively to mass market tastes.

Next came February’s announcement that Borders would eliminate the community relations coordinator positions at individual stores, thus killing off the strongest tool available to establish loyalty among local readers.

Then in April 2001, Borders abandoned managing its own web site and handed over the responsibility for running it to — you probably know this already — Amazon.com. The shortsightedness of this decision, in hindsight, cannot be overstated.

Finally, on September 11, the company’s top earning store was destroyed during the terrorist attacks on the World Trade Center — a significant loss by any measure. Yes, Borders bounced back and opened a flashy new store nearby some years later, but that one was never as beloved as the WTC site and it closed a few years later.

What followed over the next decade was just more in a series of unfortunate events. There was labor unrest as Borders’ employees at various stores tried to unionize — a 2003 strike even shut down the store at the company’s home of Ann Arbor. Layoffs hit Borders HQ and the management suite started to look like a clown car, with droves of people coming in one door as others fled through another. The final blow was the 2008 financial crisis, which derailed ambitious plans to reinvent the chain as a state-of-the-art, digitally-minded retailer — well before Barnes & Noble got around to doing the same thing.

Looking back, my fondest memory of Borders is of making a pilgrimage into Ann Arbor to buy a copy of William Gibson’s Neuromancer in 1984 at Store #1 (I grew up in nearby Wayne, Michigan). All the cool kids on my block were reading the book, and Borders was the cool place to buy the book (and pick up some Dungeons and Dragons modules at the hobby shop next door…Yes, I was a geek).

Since then, I’ve enjoyed shopping at dozens of Borders across the United States, in outposts as far away as Kauai, Hawaii and San Juan, Puerto Rico. Like many, I will be sad to see them gone.

And I’ll be honest, I’ll mostly miss Borders because shopping there was just so damn cheap. Provided you were part of their loyalty program, you could regularly take advantage of coupons that gave you 30-40-50% off your purchases. On top of this they’d give you “Borders bucks” — basically a further discount. If you were savvy enough, you’d never pay full-price for anything.

Sometimes, the coffee I bought at the cafe cost more than the books I bought…I would often ask my wife as I was leaving the store with an armful of stuff that I’d bought for a pittance, “How can they afford to stay in business?”

Now I know. They couldn’t. As I look back on it, it may seem oddly prophetic that the first book I bought at Borders was the one that defined the early digital age and introduced us to the word cyberspace. Still, while management would like to blame e-books and digital publishing and the economy for the demise of Borders, the truth is that it all really comes down to one thing — human error.

DISCUSS: Will Others Fill in the Gap Left By Borders?