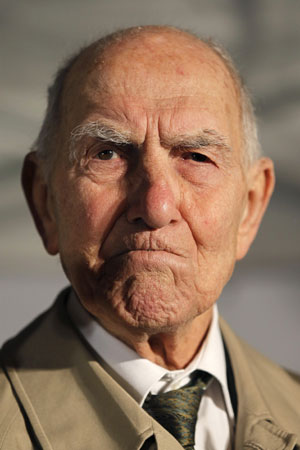 Stéphane Hessel is France’s 93-year old publishing phenomenon with his 14-page political essay, Indignez vous! (Time for Outrage!), released in October 2010, in which he exhorts readers to become outraged about the state of society. The book is now on bestseller lists in Germany, Spain and Italy. Quartet has just published the British version and in the US The Nation magazine offered the essay to subscribers in their March 7-14 issue.

Damion Searls translated the text for The Nation and British editions, both of which include an introduction by journalist Charles Glass, whose new imprint at Quartet published the essay. Hessel’s French publisher, Indigènes, also hopes to sell rights to a US publisher with a well-known personality such as Sean Penn providing a preface. Former Le Monde correspondent Sylvie Crossman and her partner Jean-Pierre Barou run the small publishing company based in the south of France. They publish books on indigenous art as well as a series of $4 essays (which includes Hessel’s) called Ceux qui marchent contre le vent (Those who walk against the wind). The idea for the political pamphlet came to Crossman and Barou after a talk Hessel gave in 2009 during a meeting about resistance among citizens. Crossman interviewed Hessel several times, wrote the text, submitted it to him for corrections, and voilà, 1.4 million copies later, “Indignez vous!” remains at the top of the bestseller list.

“When the essay came out I thought we would do well and sell 200-300,000 copies.” Remarked Barou. “Stéphane Hessel is an exceptional person and the ideal symbol of France. In this era of total rationalism, Hessel leaves room for poetry and beauty.”

The success of Hessel’s essay is doubtless due to French and a more generalized dissatisfaction with politicians, but also to his remarkable past — as a World War II Resistance fighter, a concentration camp survivor, one of the members of the committee that drafted the universal declaration of human rights, a diplomat and human rights activist.

In his essay Hessel urges young people not to remain indifferent to human rights and politics, underlining the disparity between rich and poor, the treatment of illegal immigrants, the suffering of the Palestinians, and the importance of protecting the environment and the French social welfare system.

French intellectuals and the CRIF (Representative Council of Jewish Institutions) attacked Hessel for the two pages in the pamphlet in which he decries the inhuman treatment of Palestinians, in particular the inhabitants of Gaza.

“These attacks were very unfortunate,” said Barou. “I’ve only seen Stéphane Hessel get angry once, and that was when a women told him he did not respect Israel.”

Pierre Assouline, who writes a literary blog for Le Monde, has also criticized Hessel’s essay for being simplistic and badly written.

But most of the criticisms of Indignez vous! were unjust, said 25-year old Gilles Vanderpooten recently, whose new book with Stéphane Hessel called Engagez vous! (Get Involved!), was published March 10th by Editions de l’Aube.

“You cannot ask one man alone to raise so many questions and have answers to them as well. Stéphane Hessel is not the Messiah! He simply arrived at the right moment and crystallized passions that already existed.”

Vanderpooten, who is involved in sustainable development, held a series of conversations with Hessel in 2009 that began before the inception of Indignez vous!

In Engagez vous! Hessel discusses concrete ways in which people can get involved in politics, the environment, and always, as in Indignez vous! resistance to violence.

In the meantime the indefatigable Hessel has just returned from Tunisia where he met with young participants in the recent revolution.

You’re never too old to help change the world.