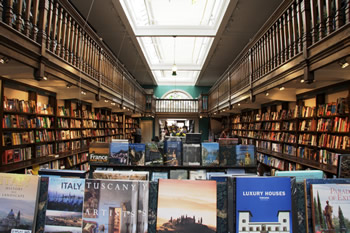 • Independent bookselling is not dead, but it takes close attention to the details — and a carefully edited selection of books — to thrive in the real world.

• Selective promotion supported by review coverage and bookseller enthusiasm are the key to moving dozens of books a day out the door.

LONDON: One title displayed at a time in the windows; selling 40, 50, even 60 copies of a book per day; paying booksellers twice the going rate at chains; staff who forgo talking with each other to attend to customers…it all might seem unlikely and illogical in this day and age of the mass market, big box/chain/supermarket bookstores. But Brett Wolstencroft, co-founder of London’s Daunt Books, believes differently.

In an interview with Monocle magazine this past Sunday, he offered a variety of thoughts on what makes for a proper bookstore, starting with the windows…

“There’s no doubt that the physical presence in the windows can sell books,” said Wolstencroft, who explained how Daunt, which is located in an Edwardian building in Marylebone (though they have four other branches), features just one or two titles at a time in its windows. “We arrived at that way of promoting books that way by accident. We used to put 20 to 30 books in the window, but we quickly discovered if you put a fantastic review in the window with 50 copies of the book in there…you can sell an extraordinary number of books.”

How many? “Publishers don’t often believe us; it can be the case that you sell 40, 50, or 60 copies a day if everybody is onside promoting it, reading it, and you’ve got the review coverage to support it. In London you can still set the ball rolling.”

Wolstencroft cited success of Hans Fallada’s Alone in Berlin (published as Every Man Dies Alone in the United States by Melville House), which he said has moved some 3,000 copies in hardcover and paperback in the store.

The store, which specializes partly in travel books, still relies almost entirely on its physical locations to shift copies. Daunt launched its website, one that offers a “virtual tour” of the store and a curated list of titles for sale, as a tool less for sales than as a means of staying in touch with its community, “so they don’t feel a million miles away from us.” But it’s not there to “compete with the likes of Amazon, which would be insane for a start.”

On what makes his store distinct from the chain competition, Wolstencroft said that in large part can be attributed to hiring good staff, “often not from bookselling,” and retaining them as long as possible.

“We ask ourselves, what would we like when we walk into a bookshop? Do you want shop assistants chatting to each other or offering you service. It’s quite easy for us,” he said, adding, “We also pay them twice what the chains pay them and if you do that you’re three-quarters of the way there to running a great bookshop.”

Wolstencroft was also surprisingly candid about what he views as the shortsightedness of many publishers with regards to bookstore marketing.

“We all know that the ‘3 for 2’ book offers on tables are not driven by the management going, these are the books I want to promote that week, there are other factors involved,” he noted, adding, “If you go down that road you lose what’s precious about good bookshops, that you care about books, have an independent opinion, and push them that way.

“But I have to say as well that publishers are not often wise enough to make that kind of connection. To come in and recognize what’s going on and tie their promotion to it. It’s all done in advance and it’s all done, often, in a way that’s too compartmentalized from what happens at the shop. Dare I say that they are not often savvy enough to come up with that kind of idea, shame that it is.”

DISCUSS: Do booksellers promote too many titles at once?