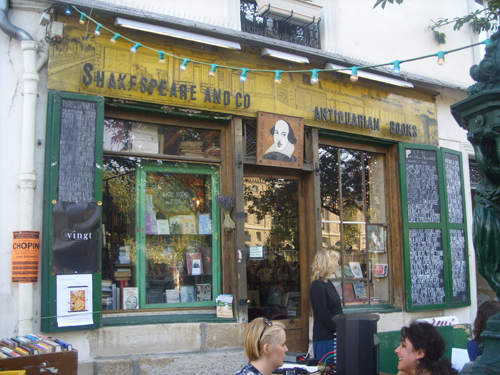 PARIS: I’ve gotten to the point during a long summer apartment swap in Paris where the Lonely Planet France and Paris books aren’t going to cut muster for much longer. It all begins to sound the same…one bland historical reference after another (how exciting can a single sentence be?)…it was time to hit a bookstore for some reading material (in Anglais).

Enter the renowned Shakespeare and Company, the storied writerly haunt on the edge of Paris’s Left Bank. Earlier this week on a warm Monday evening, I headed over for my pilgrimage with husband and 7-year-old son in tow, and was greeted by a crowd beginning to get seated outside for some event or another. Turns out I’d picked the one hour of the week when some famous and amazing Prize Winning writer is invited to do a reading. Last night we stumbled into a beautiful short story by Nathan Englander, author of the collection For the Relief of Unbearable Urges, for an NYU reading series that the store hosts. It was packed with students and tourists alike, clear into the cobblestone street that overlooks the Seine and Notre Dame. Englander’s 20-minute reading was too short for me, and probably a tad too long for my kid. Fortunately, I lucked out as he found a black Labrador to fawn over during the “consummation with the prostitute” section. He did look up at me at one point to ask me what the story was about, and I said “Well, this guy gets sick of his wife”, and he says to me, “And he kisses another lady and the wife gets jealous?” Yep, in a nutshell. Now go back to petting that Labrador, will you? The store itself is much the same as I found it roughly eight years ago (and I suspect much the same as it’s opening day in 1951). Beautiful editions of modern paperbacks take front seat, while upstairs the warren of rooms remain dusty and inviting. This time around, I was newly grateful for the cushioned bench in the children’s corner; Jim could read Anatole the Parisian mouse to Jamie while I poked around, trying to remember what my earlier poetess years felt like moving through the stacks for a bit. Sadly, the black cat I’d fallen in love with during my last visit was missing, and I fear the worst as it was in its gentle older years back then…

The one thing we remarked on when leaving was that it seems like the last time we made a visit, we were greeted by enormous stacks of reasonably priced used paperbacks — perfect for travelers with one carry on bag and a budget to stick to. This time around, the bulk of the selection seemed to be handsome Vintage-esque Modern Library types, on sale for the cover price and beyond. Still, the used books are strewn about, shelved both downstairs and upstairs if you feel like digging around. I found a small paperback for three euro of Rebuilding Coventry, Sue Townsend’s first book post Adrian Mole.

The Underwood typewriter perched on a little alcoved desk upstairs is still a sweet touch, yet this time around felt sort of contrived. A sign tacked above it said something along the lines of “sit here and meet your muse”, and I felt slightly embarrassed considering the possibility that I would actually do this while Nathan Englander was downstairs. The store has just begun to put out its own literary journal, The Paris Magazine (edited by former Granta managing editor Fatema Ahmed), and I picked that up for later reading. It’s an attractive and hefty journal, well priced for the store at six euros. They’ve also launched The Paris Literary Prize, a €10,000 award (roughly $12,000) to be given out every other year for a novella written by an unpublished author (read more about how to submit here). The store, after all, has a record of supporting up and coming writers through the decades, and maybe in a few years I can come back, sans le bebe, to revisit that Underwood and hang out for awhile.

DISCUSS: Traveling? Tell us about your bookstore discovery.