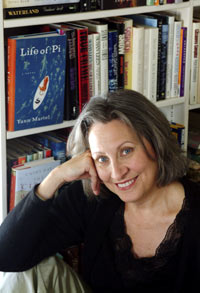 For 34 years, I worked as an editor and publisher in New York publishing corporations. I was the youngest editor ever to be given her own imprint (Poseidon Press/Simon & Schuster), then went to Crown as Editorial Director, and finally to Harcourt as Executive Editor. At Harcourt I was a part time employee, publishing only five or six titles and year, resident in the office only a couple days a week. After meeting an excruciating end at Poseidon, then surviving cancer, I didn’t want to be a “player” anymore, wanted just to be a book editor. I was soon turning fifty and had seen many older editors put out to pasture, gently or brutally. I wanted to get to know the pasture too, part time.

For several years I had an idyllic editor/publishing house marriage with Harcourt. I was allowed to buy whatever I felt passionate about if the advance was less than six figures, and was included in every part of the publishing process. I published three debut bestsellers in as many years.

Gradually the company began to change. Expensive marketeers were hired; the word “product” was heard. Editors were no longer invited to Sales Conferences, indeed our titles were often presented by assistants in the marketing department. Catalogue copy and tip sheets were rewritten, often without our consultation. Once the marketing department changed the cover of a reader’s edition without telling me (or the author, needless to say).

I began contemplating going freelance. Though my position looked perfect from the outside, the hegemony of marketing was becoming more and more dispiriting and frustrating. The decision was made for me. During the meltdown after the overleveraged Houghton Mifflin bought Harcourt, I was fired.

There has been a flurry of thoughtful and true articles lately lamenting the devaluation of the editor. But enough lamentation! We all know the publishing industry of yore is long gone. What about the future? In the Internet free-for-all book editors may become more, rather than less important. The editor is the author’s interface with the world at large; the other roles in publishing houses, as they are now configured, may become obsolete in the digital future. Publishers may devalue editors, but writers and agents don’t. As business models change, it’s time that book editors reclaim their essential place in the publishing process, and be appropriately compensated for it. It’s heartening to see the proliferation of editor imprints at the large publishing houses. Why is there not an Editor’s Guild, like the Author’s Guild?

There are two sorts of editors: those who work with writers on manuscripts, who have no desire for management or publisher positions -– let’s call them book editors. Then there those who love the limelight, love being players, who aspire to being publishers — let’s call them publisher editors. Some of us have been both, simultaneously or sequentially. Book editors have rarely been fairly compensated by their companies. Low pay has been part of the ethos, profit participation rare to unheard of. It’s time to change that. Book editors should receive a royalty.

This composite, but real life example illustrates my point:

Book Editor discovers a first book with tantalizing possibilities, but clearly, it’s a mess. The novel it will become exists as much in Book Editor’s imagination as it exists on the page. She buys it for a nominal sum. She works many hours (mostly nights and weekends), over several drafts to coax out of Writer the best book it can be. She closely line edits the final draft. Then she goes into marketing mode, making sure the book is titled, positioned, packaged and presented properly. She makes an obsessive pest of herself, both in and out of house, in the service of the book. But in the end her and Writer’s long labors are rewarded! The novel becomes a major bestseller, launching a long career for Writer, bringing the company years of pure profit.

A book editor should participate in such a bonanza along with the publisher, agent and writer. When a book editor’s work is extensive (re-structuring, re-plotting, re-writing) and substantially contributes to the final book, a one or two or three percent royalty is not too much to ask. If a book editor is on staff at a company, such a royalty should begin only after the advance has earned out, or after some number of copies which insure the company’s target profitability have sold.

Many agents now use freelancers such as myself to perfect a manuscript or a proposal before it is sent to a publishing house. It’s nearly impossible for an editor to get promising but not ready-to-publish projects past “editorial boards,” comprised mostly of sales and marketing folks. (Sales and marketing folks don’t think like editors, even though editors must have marketing mojo to be successful.) And when a company has bought a title on the basis of a proposal (probably co-written by a freelance editor) the manuscript that arrives needing major work is, more often than not, farmed out to a freelance editor.

As a freelancer, I miss the worldly, bookish, hurly burly (and the expense accounts!) of NYC publishing. But I love being able to focus on the work of helping a writer produce a potentially important or lucrative (or both!) book. I can arrive at an agreement with the writer without an intermediary. I don’t have to jump management/marketing/sales/moneymen hurdles to get to my work.

I wonder if there will still be book editors at major publishing houses in five to ten years, or if all extensive editing be done by freelancers. Will freelancers team up with agents? Or will we team up with author’s who become internet publishers of their own work? Perhaps we’ll simply go on as we do now, anonymously serving the cause of good reading and good writing. The pasture is greening.

At Harcourt, Ann Patty’s bestsellers were Jenna Blum’s Those Who Save Us, Emma Donoghue’s Slammerkin, Michel Faber’s The Crimson Petal and the White, Yann Martel’s Life of Pi, and Abigail Thomas’ A Three Dog Life. Her website is www.annpatty.com

DISCUSS: Do book editors deserve a cut of the profits?