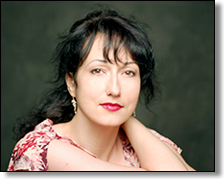 PARIS: I grew up bilingual in Los Angeles: the world around me spoke English, but my French father and Egyptian mother spoke French to each other, and to understand what they were saying, I had to learn it.  Comparing the sinuousness of French versus the steely directness of English, I grew up obsessed with the differences between the two languages, mulling over expressions that don’t translate, reflecting on the way each language seems to express something missing in the other. As I translate animated French TV series into English for a living, I get a lot of practice figuring out how teenage monsters, talking panda bears, and transforming super heroes should sound. But what interests me is more complex than the admittedly fun task of translating prepubescent witticisms, so I wrote my first novel, Foreign Tongue, about it.

As I was writing it, I noticed there weren’t any novels that addressed my particular pet idea. There are lots of books about people moving to France, but they tend to be written by outsiders looking in: people entranced or repelled, caught up in the humor or frustration, privilege or disadvantage of being a foreigner in France. The French, they are so: puzzling, frustrating, intriguing, annoying, rude, smelly, precise, chic, and/or (insert your adjective here). But a bilingual woman is both an insider and an outsider.

Funny, then, that it turns out my novel seems to be untranslatable, at least into the other language it is about, French. There’s a lot of French in my book. I think and hope it’s written so that even if you never studied the language, you can still understand what’s going on in the French passages, which are commented upon in English by my narrator. But here’s the crux of the matter: the French phrases and expressions in the book are dissected in English; that is, understood and parsed through English.  So, though the novel is in English (the protagonist), there’s a necessary tension with French, the antagonist. If you translate everything into French, the tension is gone. You’d have to convey that the French-language voice is that of a bilingual American, who is commenting on the French language; so, you’d read a French voice puzzling over odd French phrases — in French! Perhaps a really good literary translator could do this, but I’m not sure how.

“This is not a problem,” my French cousin said. “All you have to do is change all the French into English and all the English into French.” He hasn’t read my book, as his English isn’t very good, but unfortunately, he’s wrong. What he’s suggesting means writing an entirely different book, from the point of view of a bilingual, but native French person commenting on the foibles and eccentricities of the English language. It’s a nice idea, but it’s not the book I wrote. Not even close.

Here’s the interesting thing about being bilingual: deep down, you’re more in one camp than the other, even if the difference is slight. My mother tongue is English. I write in English, from inside English, and even when I don’t use it much, it’s how my brain thinks. I can get inside French, often I think and dream in it, but it’s not as seamless, and sometimes I can see the gaps in my own knowledge: the concepts I understand but still feel foreign, that make me feel not quite French enough.  Every once in a while, I’m even baffled by ideas that seem so alien they might as well be UFOs. I can write about French, but from my English point of view.

“I think it’s untranslatable,” said the Hungarian translator, who translates into both English and French.  She could be right, but Latvia bought the rights for translation — apparently they buy and translate everything, those Latvians, and this knowledge makes me want to buy airfare to Riga.

“What would you call it in French, if you had to translate it?” asked the retired French journalist at a dinner party in Paris. The title of my novel translates perfectly into French, and anyone who claims to speak both languages would understand this right away. I was jet-lagged and cranky, but my mother didn’t raise rude children, so I paused and exchanged a baffled look with our bilingual hostess.

“No, no!” he snapped, giving me an impatient look. “You see, in French, langue,” and here he stuck his tongue out at me and pointed at it with his finger. “Langue in French, it means not only language, but also the tongue. There is a double meaning that does not exist in English.”

I realized this Frenchman was trying to enlighten me about my own language.

“It’s the exact same thing in English,” I said. He scowled and looked away.

When I wrote and told my parents, my father used a French expression: “Il a manqué une occasion de se taire.” He missed an opportunity to keep his mouth shut. In French, it’s elegant and cutting. In English, it’s awkward and dull — perhaps because we miss opportunities to do something; we may understand the notion of a missed opportunity not to do something, but we don’t have a phrase for it. That’s why I wrote my book, but maybe that’s what makes it untranslatable into French.

Vanina Marsot is the author of Foreign Tongue. Visit her online at www.vaninamarsot.com

DISCUSS: What are the Biggest Obstacles to Translation?