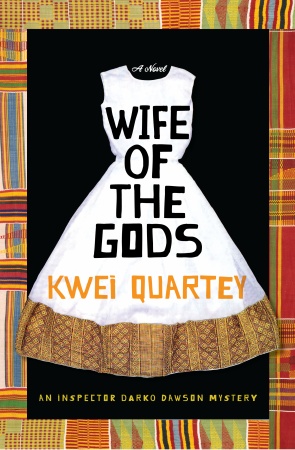 ACCRA, GHANA: About 10 years ago, I wrote a novel set in Africa. An agent to whom I sent the first pages turned it down and told me, “There are two places on earth that no one has the slightest interest in reading about: Afghanistan and Africa.”

What a difference a decade makes: Khaled Hosseini’s smash hits The Kite Runner and A Thousand Splendid Suns take place in Afghanistan, and Alexander McCall Smith’s wildly popular and bestselling No.1 Detective Ladies’ Agency series, set in Botswana, blazed a trail for new mystery writers with African protagonists. Michael Stanley’s Detective Kubu solves crimes in Botswana, and Malla Nunn’s Emmanuel Cooper is a detective in 1950’s South Africa. Following close behind is Detective Inspector Darko Dawson of Ghana on the West African coast, introduced to the world in my debut novel, Wife of the Gods.

Although I’ve lived in the United States for decades now, I was born and brought up in Ghana by an African American mother and a Ghanaian father. It was very important to me to write from the perspective of a black African detective in a black African milieu. Therefore Ghanaian culture and beliefs feature as strongly in my novel as the murder itself. The story is not just a how and whodunit, but an exploration of some of the customs and practices I learned about as I was growing up.

A research trip to Ghana in February 2008 was well worth it. Because I had not paid a visit in many years, some of the details in the early drafts of Wife of the Gods were out-of-date. Ghana had metamorphosed in the long period I had been away. The use of mobile phones was ubiquitous, and new buildings and highways made large areas of the capital city Accra unrecognizable to me. I discovered that I was dead wrong in my assumption that the Ghana Police Service did not have crime scene units, a piece of information that affected a crucial part of the story. It was an embarrassing moment I would rather forget.

In Wife of the Gods, Darko Dawson confronts a murder in a rural area of Ghana. How does this setting rate for crime fiction? Well, I think.  But even if you put aside the murder, there is intrinsic mystery in the nation’s belief systems alone; for some Ghanaians, the physical world coexists with another realm of gods and their magical powers. These beliefs can considerably complicate a murder investigation.

As a mystery writer, I’m drawn to Ghana because it provides a compelling background to any crime. The society is in rapid flux. Traditional clashes with modern. As affluence increases, so does the gap between the rich in their mansions and the poor in their shantytowns. Young people surge in vast numbers from the rural areas to the big cities in search of employment that often never materializes. Add to the mix drug lords, corrupt politicians and the mores of Ghana’s generally conservative society, and we have a rich tableau indeed.

Kwei Quartey’s Wife of the Gods will be published on July 14 in the United States by Random House. When not writing, Quartey lives in California where he runs a wound care clinic and is the lead physician at an urgent care center. Translated editions are forthcoming in France (Payot) and in Germany (Verlagsgruppe Lubbe).

EXPLORE: Quartey’s Web site, where you can read excerpts, a Q&A, etc.

LISTEN: To a podcast interview with the author.