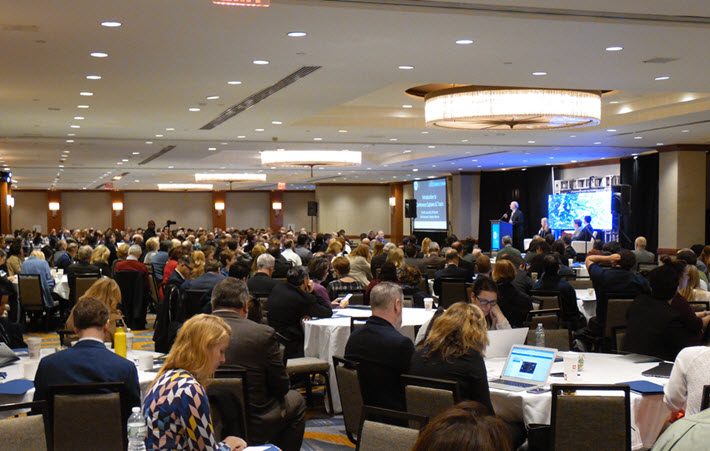 The 2017 Digital Book World conference opened with calls for more data-driven decision-making, despite the inherently subjective nature of book publishing. 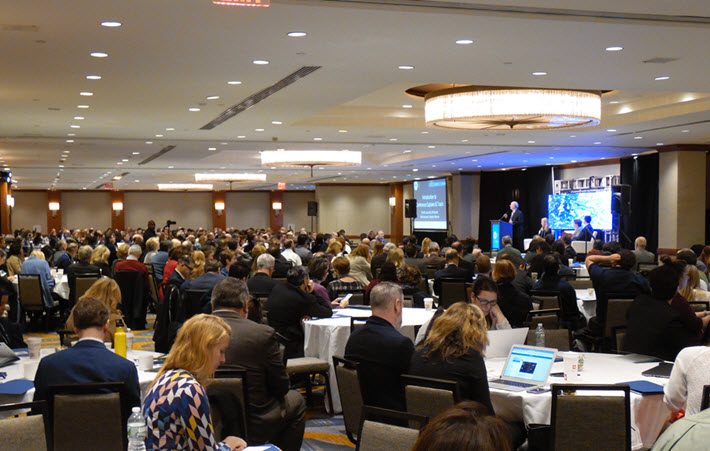 Some 650 people are registered this week for the two industry days of DBW 2017 in Manhattan. Image: Porter Anderson

‘The Book Market Is Unique’

In its opening on Tuesday, the eighth annual Digital Book World conference in New York City attracted some 650 registrants. This year’s new structure included four distinct programming tracks and a “captain” for each:

And while few surprises came out of the key sessions on Tuesday (January 17), it was interesting to hear Macmillan CEO John Sargent—who is also president of Holtzbrinck Publishing—speak to the place of digital issues on publishing people’s minds as he opened his keynote. When conference attendees were asked to submit questions ahead of the event, he said, “Oddly enough, almost none of the questions had anything to do with digital, here at Digital Book World.”

‘The Good News and the Bad News’ 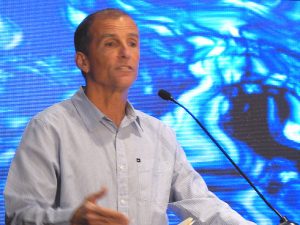 This had played into what Sargent wanted to say, however, about the abiding thrust of the industry’s work. While he sees “a bit of hand-wringing, still, on the digital dark side,” seven years into the digital disruption of publishing, “ink-and-paper books continue to be the favorite, not only the way for the population as a whole but for our kids to read.”

In terms of digital sales, Sargent said, “Ebook growth has stopped, and it has stopped before it forced book retailers out of the business, as it did music and video” retailers.

“All this doesn’t mean that we’re through the transition to digital” yet, Sargent cautioned. “And there are certainly many, many dangers ahead.”

What he called “the good news and the bad news” is the rise of the self-publishing sector, which DBW will focus on Thursday, in DBW Indie Author, a daylong conference for entrepreneurial writers. “It’s growing through Amazon Kindle Unlimited,” he said. “We don’t know how big it is, but we know it’s very big. And what it tells us [is that] there is plenty of reading going on out there.”

“We’ve pissed away millions of dollars over the years on ads on the back page of The New York Times to sell eight more books.”John Sargent, CEO, Macmillan

In listing more hurdles, Sargent said “There are fewer and fewer newspapers out there, and their audiences are shrinking. Discovery is an ever-growing problem. Big titles get bigger, and everything else gets harder and harder to find and sells fewer and fewer copies. Retail power is consolidating.”

Still, despite the importance of gut instinct, many decisions made in publishing “can be improved,” Sargent said, “by using data, in every aspect of our business from supply chain and workflows to editorial acquisitions.”

In an observation on the comparative advantages the industry has over “our friends in Seattle,” he asserted that “as a community, we can do better” in terms of marketing.

But he also conceded that the smartest decisions in that regard haven’t always been on view: “We’ve pissed away millions of dollars over the years on ads on the back page of The New York Times to sell eight more books.”

The goal, Sargent said, is “a steady-growth, data-rich business”—which made a good cue for the next keynote, full of Nielsen’s latest industry data. 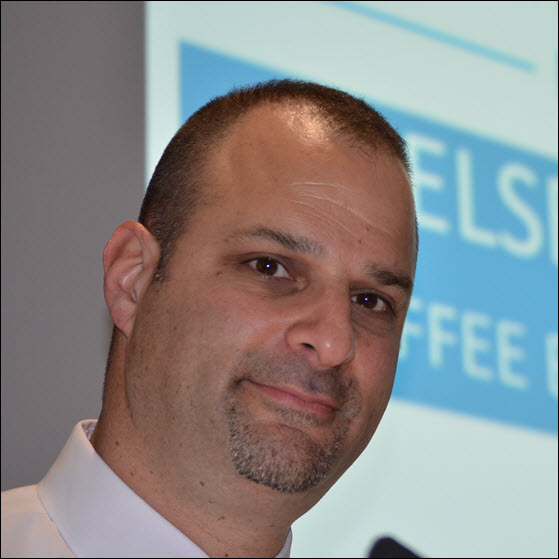 In the States, for example, concerns about economy, terrorism, and the presidential election, produced a dour -12.3 consumer confidence rating in the third quarter of last year.

However, that same period saw a gain of 3.3 percent in volume sales in books, year over year between 2015 and 2016. In the post-Brexit referendum UK, the consumer confidence rating was positive, at +7 percent and a +4.1-percent gain in volume sales. 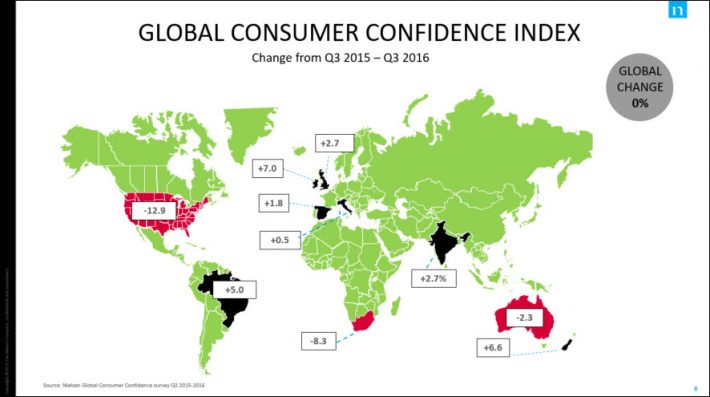 Brazil, Italy, Spain, South Africa, Australia, and New Zealand all showed decreasing sales volume in 2016, Stolper said. In the US, overall book sales, including ebooks, decreased by 1.3 percent. Stolper also pointed out that the percent of e-reader usage declined by one percentage point each quarter. 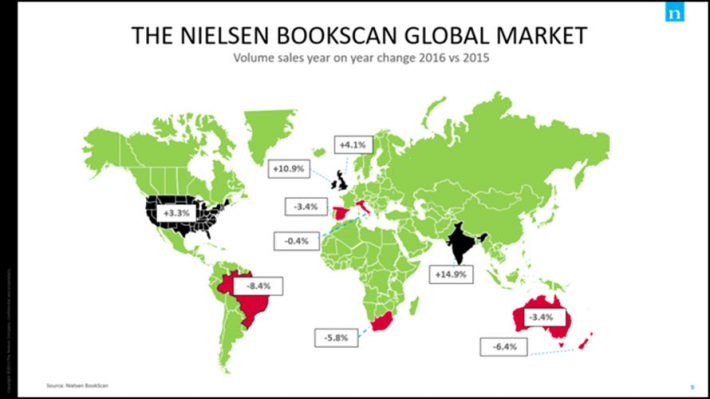 Stolper echoed Sargent’s assertion about the importance of data in a creative industry like book publishing. In a couple of slides on overall sales of two political book in the USA—the Democratic Clinton-Kaine book, Stronger Together, vs. the Trump campaign book, Great Again—he illustrated that although Democrats’ title sold more copies, the Trump book had shown deeper market penetration in the swing states that ultimately led to Trump’s election victory.

Data Guy and the Amazonian Overhang

Following these calls for more data in publishing, Data Guy and his scans of Amazon’s sales pages offered yet another interpretation of the “Print Is Back!” cheer, one that looks not at format but at where the sales are happening:

Indeed, Data Guy—who speaks again Wednesday at DBW and on Thursday at DBW Indie Author—recommended that publishing get past print vs. digital completely and think in terms of online vs. physical-store sales as the most relevant dichotomy in publishing today.

His explanation for the rise in US trade print sales in 2015 and 2016 is that in 2015 the large trade publishers’ agency contracts eliminated retailer discounting of ebooks prompting Amazon, in mid-2015, to increase its discounts on their print books, instead.

In a complex report that charts the rise of various genres in both digital and self-publishing channels, Data Guy reported several unexpected findings:

Many more data points arrived in this session on more than 60 slides, as other sessions of the day looked at new efforts in serialization, the ways some publishers are using chatbots in marketing, accessibility issues, Wattpad’s approach to finding strong authors, agents’ changing roles, and more analytics.