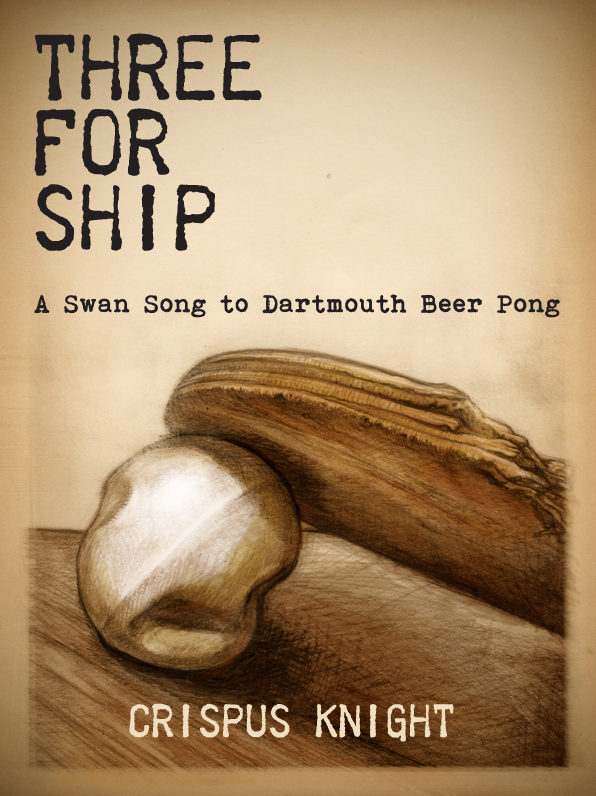 Shadows of the Ancestors by Onyechi Mbamali: This Greek-style tragic drama, set in a fictional kingdom in pre-colonial Nigeria, revolves around a king who has died but can’t commence “the journey to his ancestors” until the Crown Prince returns to the palace for the burial. Conflicts subsequently arise among the high chiefs, the late king’s wives and others — all conveyed in dialogue rich with metaphor, parables, and adages and couched in fresh language and lyrical intensity. This is a work of great beauty, universal and timeless. Read review. Three for Ship: A Swan Song to Dartmouth Beer Pong by Crispus Knight: In this riotous confessional, Knight recalls his alcohol-drenched days at Dartmouth, where he becomes addicted to “Ship,” an elitist variation of Beer Pong. As Knight describes how his life begins to unravel, he offers no sad memoir of alcoholism or simple celebration of frat-boy hijinks, but an analytical tale of how groups brainwash new members. Ping-Pong-meets-sado-masochism, this story is equal parts revolting and fascinating. Readers won’t put it down.  Read review.

The Wings of Iere: Book One, Amerindian Legends by Doris Harper-Wills; illustrated by Brenda Lyons: In this engaging collection, an award-winning storyteller offers Amerindian stories and songs she has performed, along with suggestions for their use in classroom or workshop settings. The compendium includes a useful glossary, maps, exercises, short quizzes and sheet music and would be a welcome addition to the library of any educator with an interest in folktales of the Caribbean and Guyana.  Read review.

Beloved Enemy: A Romantic Thriller by Sheila Belbin: In this tale of love and loss during wartime, protagonist Allison is asked to go behind enemy lines into Nazi Germany, in order to spy on a Nazi officer. She is glad to do her part, but what she doesn’t realize is that she might come to care for this man, and her actions will haunt her for years to come. This engaging, entertaining story is a must-read for fans of romantic thrillers.  Read review.

Mama, I Want to Come Home by Derrick G. Arjune: The future of six intelligent, ambitious black youths is threatened when they wander into the shop of a Korean merchant and are accused of being thieves, although they did nothing improper. The author ably intertwines the characters’ lives as they grapple with complex issues of race, respect, prejudice, and character flaws, offering a fresh approach to the subject matter and a thought-provoking read.  Read review.

The Bloodline Chronicles: Volume 1 by Joe H. Sherman: Set in a pseudo-medieval fantasy world a la Fritz Leiber’s iconic Nehwon realm, this novel is a fast-paced, fun read with appeal for fans of adventure and sword-and-sorcery fantasy. The storyline revolves around two brothers who awaken to find themselves buried as if dead.  Smelling of rotting corpses, they unearth each other and begin to unravel the mystery of their situation.  Powered by these dynamic characters, The Bloodline Chronicles: Volume 1 is the beginning of what could be a potentially extraordinary series.  Read review.

Kete Whakairo: Plaiting Flax for Beginners by Margaret Rose Ngawaka: Ngawaka offers a wonderful guide to a traditional craft of New Zealand’s Maori people. A kete whakairo is a decorative tote bag that is shaped through a traditional method of flax braiding. The book provides an engaging introduction to this handsome, approachable technique, all wrapped in a beautiful, well thought-out package. Read review.

Perdutamente: Crazy for Italian Food – A Memoir of Family, Food and Place with Recipes by Joe Famularo: In this memoir, Famularo – journalist, cookbook author, and winner of two James Beard awards — takes readers to the NYC Hell’s Kitchen Italian tenement neighborhood of his youth during the Depression and WWII, providing a delicious portrait of the power of food and love. His lively storytelling reflects a fierce pride in his Italian roots and the colorful immigrant families who preserved their heritage through a strong culinary tradition. Readers will savor this recounting.  Read review.

Three Sisters Ponds: My Journey from Street Cop to FBI Special Agent – From Baltimore to Lockerbie, Pakistan and Beyond by Phillip B.J. Reid: This memoir shares the author’s remarkable life story as he rose from an impoverished childhood in a black neighborhood in Baltimore to become a police officer and ultimately an FBI agent. In his duties, Reid traveled the world and served as a key agent in the bombing investigation of Pan Am Flight 103. Written in a straightforward, articulate manner, with humor throughout, the memoir provides an absorbing, inspirational read.  Read review.

Willy Victor and 25 Knot Hole by Bruce Jarvis: The little known, yet critically important Airborne Early Warning Squadron (AEWRON) flew missions during the Cold War to find cracks in NORAD’s ability to detect enemy aircraft. Jarvis, a young radio operator on the specially designed planes (called Willy Victors), describes his experiences with AEWRON, his buddies and women “with a little bit of fiction” thrown in, creating an absorbing book sure to appeal to anyone interested in Cold War history, aircraft, defense and the sacrifices of unsung heroes. Read review.