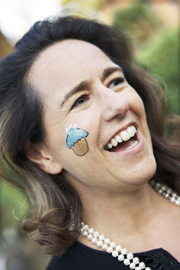 One of the more ubiquitous presences at this year’s Sharjah Children’s Reading Festival, earlier this month, was British children’s cookbook author Helen Nathan. Whether speaking at a local school, giving cooking demonstrations, or participating in panel discussions, she was everywhere, relentlessly (albeit with a smile) promoting herself, her books, her website, and her brand.

And a brand it most definitely is. Ms. Nathan’s story is a fascinating one; one that can serve as an example for other aspiring authors in today’s unsettled publishing world, where so much of the work of marketing seems to fall upon the authors themselves.

Here’s the story. After several years of dead-end hotel jobs, Nathan’s culinary career really began running a restaurant in Wimbledon, south London. She soon found herself in the wine trade as a buyer, before ultimately ending up as marketing director for one of the UK’s leading wine importers, Bibendum Wine. But marriage and children led to a break from wine marketing. She opened the Lick the Bowl cooking school where she regularly taught people from the ages of 5 to 85 how to cook, and where she soon discovered that it was the pleasure of teaching kids to cook that brought her the greatest satisfaction. Which was what got her thinking, “I need to create the world’s first global children’s baking brand.”

In an interview, Nathan explained how she developed and then implemented her plan.

“If I could write a baking adventure that kids could read before bedtime, but use at the weekend to help them increase their culinary repertoire, the book could be multi-purpose and innovative. So, with my ex-marketing hat on, I looked at bookshelves in my local bookstores and saw that no one had previously had the same idea. It was the start of a whole new literary category!”

But a preliminary talk with publishers resulted in a series of “’no’s,” along with one important question: How would the books be categorized? Would they be fiction or baking? Nathan decided that she needed a complete marketing plan.

“Enter my heroine…Flossie Crums, a seven-and-three-quarters year-old girl from Little Lickington. Flossie is an incredible baker, so much so, that when she prepares a picnic in her garden, the fairies taste her cakes and are so impressed, they ask her to become the Royal baker to the magical kingdom of Romoloria. I have three daughters, all of whom have gone through pink fairy phases. We are cupcake crazy in my house. So writing the books was easy.”

“…the licensing deals to date are worth approximately four times that of the royalties from the book, ” says author Helen Nathan.

So with a story, a heroine, and a marketing plan in place, Nathan got to work.

“I approached McDougall’s flour, the leading flour brand in the UK, with 87% market presentation. A brand with a wonderful heritage and a household name. I mentioned as politely as I could that they needed to inspire the bakers of the next generation and that Flossie Crums might be able to help them. Putting Dora the Explorer on the side of their packs would make mums suspicious, but Flossie Crums, the Angelina Ballerina of baking, would bring credibility, rejuvenation, and enjoyment to children. They loved the idea and wanted to see a copy of the book.” Of course, there was no book as of yet. But, backed with an agreement with McDougall’s, within a week Nathan had a literary agent, along with a publishing deal with Pavilion Publishing.

The first book in the series, Flossie Crums: The Fairies Cupcake Ball, went into most supermarket chains in 2009 and Flossie herself has now appeared on more than 3 million bags of McDougall’s flour.

And as a result of the deal with McDougall’s, there are now three Flossie books in print, along with multiple licenses with other FMCG companies. There is Flossie Crums cupcake decorating paraphernalia galore. There is also a plan to create a worldwide children’s baking brand, with a strong online presence and a TV show.

Nathan’s dream seems to be becoming a reality. “My plan was always to make Flossie Crums a brand and by producing a series of books, to give the brand respectability and authority. The books currently are not my main source of income: the licensing deals to date are worth approximately four times that of the royalties from the book.” (The books have sold more than 30,000 copies to date.)

Her advice to other aspiring authors hoping to follow her example? “Write about something you’re passionate about, then, have a marketing plan to help shift books off the shelf. Publishers seem to love it if you do their work for them!”