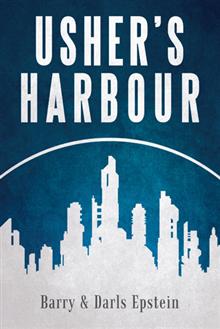 Lay Saints by Adam Connell: A sleek homage to noir with a fantasy twist, Connell’s story revolves around Calder, a grifter with psionoic ability recruited by a crew that sells its unique talents to the highest bidder, using mind control like the mafia uses muscle. As Calder gets involved with a stripper from a rival crew, he trips headlong into the underbelly of the city, filled with betrayals and occasional glimpses at redemption. Writes our critic: “It’s sleazy, it’s violent, it’s honest, and it’s a damn good read.” Read review.

The Complicity Doctrine by M.M. Frick: In this sequel to Frick’s novel Open Source, which also received a BlueInk Starred Review, everyman hero Casey Shenk again teams with fellow analyst Susan Williams. When Susan’s friend discovers her report on a Yemen Islamic insurgent group was changed substantially before delivery to the U.S. Senate, she finds that shadowy operatives are trying to assassinate her. Meanwhile, Casey and Susan begin putting all the pieces together. Fans of international suspense a la John le Carré or Robert Ludlum will enjoy Frick’s post-911 universe. Read review.

The Mystery of Grimly Manor by Donna Wren Carson: In this first young adult novel in a series, sixth graders Leira, Addy and Skye team to solve the many mysteries of Grimly Manor. Lights flicker at night in the cemetery behind the manor; before every holiday, the manor is mysteriously decorated while the neighborhood sleeps; and Mr. Grimly – always wearing a mask—only opens his door on Halloween. As the girls learn that things aren’t always as they seem, Carson’s story reflects wholesome family values and realistic preteens, a combination that will have readers clamoring for the next book in the series. Read review.

We Became Mexican American by Carlos B. Gil: University of Washington emeritus professor of history Gil writes the vivid, informative and highly entertaining story of his family’s life, beginning with a look at his peasant ancestors on a plantation in Jalisco, Mexico and continuing through to their emigration to and life in America. Neither an academic study nor dull family chronicle, Gil writes with a cinematic eye for detail, delivering a compelling book that should be a staple for history teachers and their students. Read review.

Steve Jobs & The World of Mobile/Apps: The Inside Scoop by Patrick Meyer: With its two-for-one format — read one way, it’s the Steve Jobs book; flip it over and read Apps — this nicely bound hardcover offers what techies would call “good UE” (user experience). An expert in evolving technology, Meyer offers a primer on the mobile revolution and a tribute to the late Apple visionary, as well as a fun introduction to the dizzying array of apps now available. Tech junkies may already know this information, but others will be fascinated by Meyer’s insights. Read review.

The Legal Lampoon: A Practical, No-Nonsense Guide for Anyone Interested in Becoming or Hiring a Lawyer by Richard T. Icci, J.D.: What goes on behind the scenes in the legal profession? Icci (a pseudonym) lets readers in on the secrets in his humorous, sarcastic and at times deadly serious tell-all that covers the particulars of the profession, including the stresses of law school, bothersome clients, and more. This would be the perfect gift for anyone who thinks attending law school is a direct path to making millions. If only. Read review.

Awakening: Fulfilling Your Soul’s Purpose on Earth by Ping Li: On a similar mission as Eckhart Tolle, Li aims to show readers how to align their paths with their souls’ purpose on earth. Her practical instructions include daily meditations, journaling and mental exercises. For those with spiritual stamina, the book offers real pay-off, with awakening at the end of the road. Read review.

The Days of Mankind by Terry Strapp: Strapp offers an analysis of the first chapter of Genesis, including life-application principles for today. With unique interpretations, easy analogies to clarify difficult concepts and an annotated table of contents listing the key concepts for each chapter, this book makes for an easy-to-follow, edifying read providing “hidden truths” from the Lord. Read review.