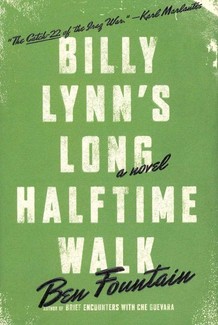 It’s the Fourth of July holiday in the United States. A time for beer, barbecue, swimming and, hopefully, a great summer book. Tell us: what are you reading and recommending to friends? I’m in the middle of Andrew Porter’s first novel, In Between Days, coming out from Knopf in October. It’s for a review, so it doesn’t qualify as a title to be recommended right now. Though I suspect, when the time comes, it will be one of my favorites of the year.

Were I to suggest a book you can get immediately, I’d have to put Billy Lynn’s Long Halftime Walk by Ben Fountain (HarperCollins/Ecco, May) at the top of my list. The novel takes place over a single day in which a squad of Iraq war heroes at the end of a “Victory Tour” and being feted during Thanksgiving Day Dallas Cowboys football game. They party hard — looking forward to the promise of meeting both the Dallas Cowboy’s cheerleaders and Beyonce — all the while knowing that the next day they are due to be redeployed to the war.

Fountain, a Dallas-native, skillfully alternates between portraits of the gun-ho monied Texas right wing boosters who dragged us into the war, the citizenry who comforted themselves with patriotic platitudes, those who tried to financially capitalize on the war, and the soldiers who sacrificed their wide-eyed American naiveté in the fight. It is by turns entertaining and enlightening; simply put, it’s a perfect read for Independence Day.