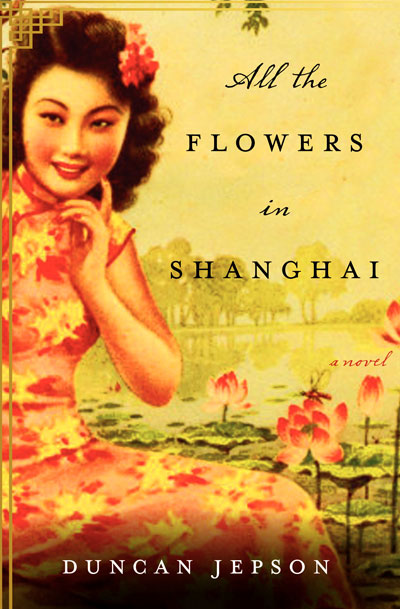 How far must a person be pushed before they reject their established way of life? I wrote All the Flowers in Shanghai — published by William Morrow this month — as an attempt to describe a life which is initially guided by tradition and unthinking personal sacrifice, utterly devoid of any western-style presumption of individual entitlement to self-determination and fair treatment. The story begins in the 1930s, an era when, for the first time, Chinese women started to question the subordinate status in which they had been kept for hundreds of generations, by a system of male domination often unthinkingly reinforced by women themselves. Concepts such as female sexuality, individuality and self-worth were unknown; femininity was defined as much by tradition as by chauvinism.

Shanghai during the late 1930s was the place where China and the Chinese experimented, and struggled, with the potency of western culture. A lucky few danced cheek-to-cheek to the startling sounds of imported jazz; European-style architecture and western dress were adopted by the rich, while around them the vast majority existed in unalleviated poverty. For a few years the city sparkled under this influx of new ideas – only to be ground down, first by the Japanese occupation and then, after a brief respite, the Communist Revolution, which sought to erase any previous influences and start again. The central character and narrator of the book, Feng, flourishes as Shanghai flourishes, and suffers as the city suffers. As a girl she follows tradition and does as she is told, willingly subordinating her own desires to her parents’ wishes and entering into an arranged marriage that will painfully circumscribe her life. As her emotional self-awareness develops through adversity, Feng starts to question the things she has previously accepted unthinkingly. At the same time, in the world beyond the closed gates of the great house where she now lives, China is questioning her own traditions, her own future course. When Feng turns her back both on tradition and, arguably, a woman’s natural role, a huge emptiness yawns before her that in the west she would brave using reason and self-determination. Instead Feng must rely purely on her emotions, which she instinctually and immediately suppresses because they run counter to everything she has been taught to hold dear.

What was important to me was to understand how far a person must be pushed before they reject their established way of life. What momentous event must occur before someone turns their back on all the traditions that have nurtured and guided them to date, the only things they really know. And what the effect on them is of realizing that so much they once valued has now been lost to them for ever. Feng is pushed to a place where tradition can no longer provide her with a raison d’être and so her reaction, which can be frustrating to westerners who don’t understand its counter-intuitive nature, is extreme. But the essence of her story is that of the abused becoming the abuser — something that is surely instantly recognizable within any culture, from the lessons of history as well as from today’s front-page news.

Apart from my brother and cousins, I didn’t meet another Eurasian until I was seventeen. In Hong Kong I now see them in prams and pushchairs by the dozen, being wheeled around the shopping malls in Central. During my seventies childhood, I grew up in Yorkshire, in the UK, where the Far East, as it was then known, was considered distant and undeveloped, and China as opaque, backward and unfathomable. The world of this latest generation of Eurasians and Asian Americans is small and crowded. The differences between the cultures are now evident from uncomfortably close quarters; tensions exist in everything from trade deficits to film distribution to mining rights. I look at today’s children and wonder whether they will have the same experiences I have had in trying to negotiate a balance within themselves of the strengths and flaws of each of these two very different approaches to human existence.

As a trainee solicitor, I remember a mainland lawyer telling me that classical Chinese philosophy views the law as the process of  moving from chaos to harmony, whereas the western concept of law is that of creating order from chaos. In my novel I wanted to tell a story that would leave the western reader with an impression of a life lived by different rules, where the central character does not follow western logic. Feng’s life is directed by tradition and when, in the face of profound emotions, tradition fails her and vital questions are left unanswered, there is nothing left for her but confusion and frustration. Whereas in the west, reason tends to take precedence over tradition, and it can seem incomprehensible that anyone should ever allow themselves to be constrained by ancient rules.

Duncan Jepson was a founder and is currently Managing Editor of the Asia Literary Review. He is a lawyer and filmmaker.

DISCUSS: Do We Need the Term ‘E-book’ Any Longer?